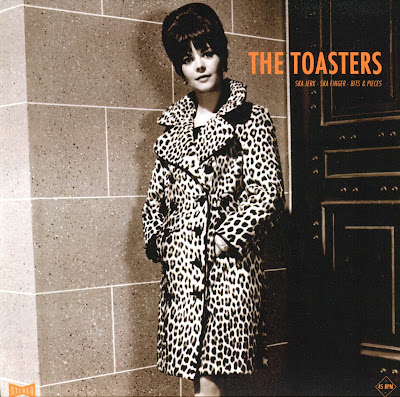 According to Bucket's liner notes, the organizing theme for this new single from The Toasters is to highlight what he feels is the less-acknowledged American soul and blues influence on the 1960s Jamaican musicians who created ska (a point he explicitly emphasized in his song "Chuck Berry" from 1996's Hard Band for Dead). To support/celebrate this connection, this single features The Toasters' previously unreleased cover of The Capitol's 1966 hit "Cool Jerk," presented here as "Ska Jerk"; this lively version with Jack Ruby, Jr. toasting at the mic was originally recorded sometime post-Don't Let The Bastards Grind You Down for a compilation that was never realized. The flip side contains the Bar-Kays' 1967 track "Soul Finger," which was, of course, re-named "Ska Finger" and appeared on The Toasters' 2002 album Enemy of The System. The real gem--and probably the best cover The Toasters have ever committed to vinyl--is their blistering take on The Dave Clark Five's "Bits and Pieces" (1964), which was one of several incredible tracks on their underrated One More Bullet (2007). (Toasters' completists will want to know that 500 copies of "Ska Jerk" were pressed with five different cover/vinyl color combinations--the iteration reviewed here and picked-up via Jump Up Records features actress Natalie Wood on the picture sleeve.)

The only bum note to this 45 is how it reminds one that while The Toasters' album/EP reissue program has been in full effect over the past several years (and they're almost always touring some part the globe), they haven't released any new music since 2013's stellar "House of Soul" single (read The Duff Guide to Ska review). Surely, with all that's going on these days (Trump, Brexit, the rise in white nationalism/nativism/authoritarianism, catastrophic/life-ending climate change, extreme economic inequality, etc.), there's more than enough to write about?