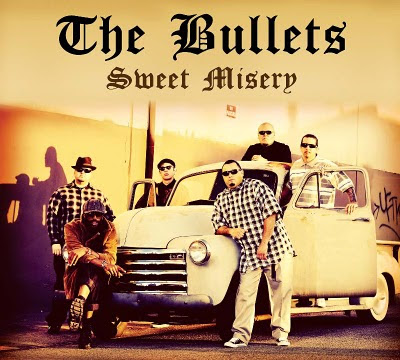 Shame on those who shortchange The Bullets by labeling them as a side project of Aggrolites' ace organist Roger Rivas, since this is fully-realized, extremely talented band, producing a stunning mix of soul-drenched reggae love songs (think Toots & the Maytals' Funky Kingston meets Hepcat's Out of Nowhere) and killer skinhead reggae instrumentals (cue up their "Hotter Reggae" and "Smiling Horse"). Lead singer Malik Moore (Mobtown, Ocean 11) has a raspy tenor that gives these cuts an exceptional amount of warmth, urgency, and emotional impact. Key songs include the irrepressible "Shot From a Barrel" ("I'm like a cork that's shot from a barrel on a Friday night/And I'm bigger than a blast of freedom on the 4th of July"); "On That Side," a gorgeous tune where the singer wonders if it is wiser to be lovers or friends (voices in the background point out that "the grass is greener on the other side"); "Sun Drenched Witch" aches for every guy who's been bewitched by a woman who is both his "tormentor and savior"; and "Crystal Necklace," where the singer's woman "tried to stand me up to fall," but neither of them really knows what's up and where they are going to end up, since "she ain't got no crystal necklace/and I ain't got no crystal ball." Sweet Misery is surprisingly tender reggae music made by--and for--tough guys. This is definitely our pick as one of the top ska/reggae releases of the year. Highly recommended! 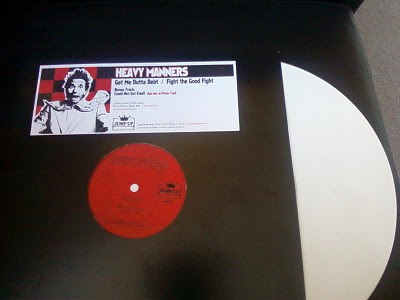 Like most ska bands from the 80s, Heavy Manners' sound was/is more permeable than the bands that came later on the American ska scene. The advent of new wave--and the crazy jumble of sub-genres that were included under that label--freed many ska acts from that era to pick and choose what musical styles to integrate into their mix, which can be a refreshing change from the kind of stylistic rigidity that is practiced by some bands (and fans) today. So it's great to hear these two new tracks from Chicago's mighty Heavy Manners, the first they have recorded since the Eighties, and to note that their taut, angular, new wavish-ska is more in line with The Waitresses and Romeo Void than 2 Tone. "Get Me Outta Debt" is a tragi-comical take on being down and out in the post-Dubya deregulated market hangover years ("I bought derivatives/so did the relatives/Hey momma, here's a shocker/Now I'm living in my storage locker")--and seeking deliveration from "Holy Jah, Selassie I," as well as some choice herb. The harder-edged "Fight the Good Fight" gets inside the heads of the good soldiers who do what they're told, since that's what they do, even when what they're doing doesn't make sense--"Who was the President who said we won?/How come I'm sent back for another run?" The time-capsule bonus track here is an unreleased dub version of "Could Not Get Enough" by Peter Tosh, who produced a slew of songs for Heavy Manners after catching the band live. If you're a fan of the kind of square peg ska that was produced post-2 Tone, but before the ska-punk/vintage-ska split of the third wave, then this is a must!

Duff Guide to Ska Grade: B+
Posted by Steve from Moon at 3:00 PM

As soon as I get back from vacation I'm ordering that Heavy Manners. I've been waiting for this release for a while and I can't wait to get it!

You're going to love it!

Not sure if any of you guys are in Chicago, but if so, Heavy Manners is reuniting for a set at the taste of Lincoln Ave this Sunday at 6PM. They're also hosting an after-party at the Eblo Room at 8PM - should be pretty sweet.

Thanks, Anon! I'm in NYC, so I won't be making it--but I appreciate you sharing the info with The Duff Guide to Ska readers! Wish I could be there, though...