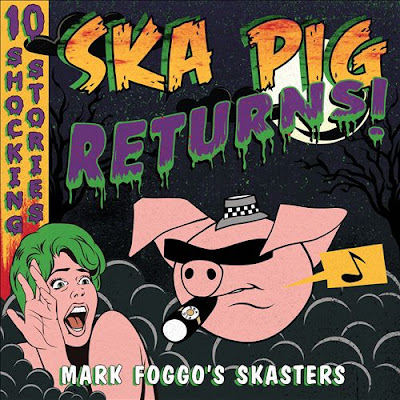 Mark Foggo's Skasters Ska Pig Returns (LP, Jump Up Records, 2019): For anyone counting, Mark Foggo's Skasters released their debut album Ska Pig 30 (!) years ago (I first encountered them in '89 on Skank Records' Ska For Ska's Sake compilation), hence the title of their new album, Ska Pig Returns. Throughout the decades, Foggo and Co. have been remarkably consistent in creating album after album of incredibly high energy, sing-song-y, slightly demented, but always entertaining 2 Tone-influenced ska (think Madness' "Land of Hope and Glory"/"Baggy Trousers" meets Ian Dury and the Blockheads' "Hit Me with Your Rhythm Stick"/"Reasons to Be Cheerful, Part 3") and their latest record doesn't disappoint! There's a stomper about encountering a woman on a train and thinking "she was the one, I was sure" but having her turn out to be the dreadful Theresa May and telling her off; a song about trying to make the best of things in increasingly dire times what with the planet dying and "Trump as boss" ("Eat Up Your Weeds": "Things are never as bad as they seem/But you never wake up from this one bad dream..."); and "Dum Diddy Die," a powerfully dark nursery rhyme of nonsensical sounds and disturbing couplets ("I've got to get a gun/And I got and fight the enemy/There's a very good chance/That maybe it's the end of me." But then there's the upbeat "Do The Monkey" (detailing the indignities the monkey in the zoo must suffer to get on); "London" is a really lovely, New Wave-tinged, unconventional tour of London ("Saw the queen and changed the guard/Breaking in, it wasn't hard/I just used my Oyster card/Had to beat the Scotland Yard/When I tried to steal the crown/The Beefeaters came and cut me down"); while the awesome "Rats and Mice" is about taphophobia, a fear that was much more widespread during the Victorian age ("Please build my coffin air-tight/But leave me for the rats and mice/And put me in a shallow grave/In case there's been a mistake/And I'm still alive!"). As you might infer from all this, Mark Foggo's Skasters' Ska Pig Returns seems like a blast--'cause it is! 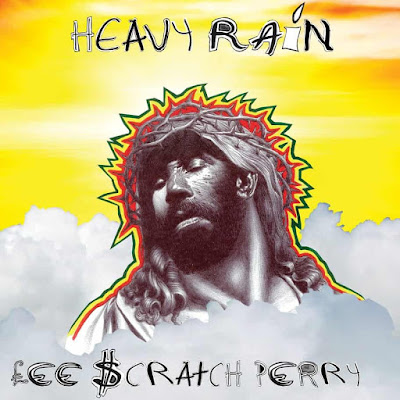 Lee "Scratch" Perry Heavy Rain (LP/CD/digital, On-U Sound Records, 2019): This is the wild and massively good dub version of Perry and Adrian Sherwood's recent collaboration Rainford (reviewed by the Duff Guide here)--that actually overshadows its source material (and they include a few new cuts, too!). Heavy Rain plays to Perry and Sherwood's strengths as versioners; they're masters at revealing the dub versions not represented by, or hidden within, the official version (even if they created it in the first place). Perry and Sherwood have made space for the Rainford tracks to recombine, mutate, and augment--and their work reimagining the songs and adding effects, and blips and beeps both natural and synthesized is nothing short of brilliant. The deserved attention-getter is the incredible "Here Come the Warm Dreads" (the dub of one of Rainford's best tracks, "Makumba Rock"), with Brian Eno (get the punny title of this track now?) working his magic on everything coming out of your stereo's right channel. Perry's anti-capitalist/greed broadsides are largely traded in for the truly great Vin Gordon's melancholy, yet all-vanquishing trombone lines--and Gordon's playing is nothing short of magnificent on the now jauntier "Crickets in Moonlight" (original: "Cricket on the Moon"). Perry's "Autobiography of The Upsetter" is transformed into "Heavy Rainford," a wonderful conversation between a bluesy harmonica and reggae trombone (Vin Gordon, again!). The three new tracks that they slip in here are of the same calibre and fit in seamlessly. "Dreams Come True" is a slumberous cut that creates a musical twilight zone between the real and imagined (and this is apparently some of what Perry sees: "Mick Jagger/Tripe and banana/Rolling home from work work/Feeling kind of peckish/Flying to his home/To have his favorite dish/Ackee and saltfish"). "Above and Beyond" features both violin and sax lines ebbing and flowing over a strutting riddim, while "Mind Worker" (Perry: "I move brains and I transfigurate minds") has these amazing jazz piano breaks in the midst of a serious reggae groove. Heavy Rain has to be the best reggae album of 2019 and is certain to go down in history as another Perry/Sherwood masterpiece.