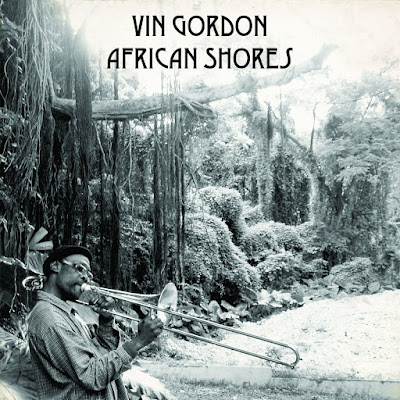 While Don Drummond and Rico Rodriguez may be more familiar to ska and reggae fans than Vin Gordon (AKA Don D., Jr.), there's no doubt that they've heard Gordon's trombone playing, as he's performed on hundreds of crucial ska, rocksteady, and reggae recordings (that's him on the foundational "Real Rock" riddim with Sound Dimension) and helped establish the classic and enduring Jamaican ska and reggae trombone sound, along with Don Drummond and Rico Rodriguez, who were fellow alum of Kingston, JA's Alpha Boys School's music program under bandmaster Lennie Hibbert. (Gordon's Discogs entry is over 20 pages and includes his work on classic releases for just about every significant reggae artist you can imagine, including Lee "Scratch" Perry (he both performs and has writing credits on Scratch's latest albums, Rainford and Heavy Rain), Bob Marley, Burning Spear, Aswad, Coxsone Dodd (he was Studio One's main trombonist), The Heptones, The Ethiopians, Culture, Big Youth, Horace Andy, Mad Professor, Mighty Diamonds, Bob Andy, Keith Hudson, Augustus Pablo, Max Romeo, King Tubby, The Skatalites, Tommy McCook and the Supersonics, Alton Ellis, The Revolutionaries, and many more--he even recorded a ska LP during the 2 Tone era, which I picked up in the late '80s). Having said that, the number of albums released under Gordon's own name are relatively few, given his talents and the scope of his career.

UK reggae producers/musicians Al Breadwinner and Nat Birchall (a celebrated jazz performer in his own right) had this in mind as they were planning their next Sounds Almighty album of roots reggae instrumentals with Gordon--and decided to turn it into a full-on Vin Gordon album instead. What's wild is how this record came together. Birchall composed the instrumentals for the album, and then he and Breadwinner recorded the rhythm tracks (Birchall on bass, piano, percussion and Breadwinner on drums/percussion, guitar, organ, and piano). Then Vin Gordon joined them in their analogue studio, listened to each cut a few times and came up with his horn lines on the spot (in old school Studio One fashion), which were then recorded in a day--and the horn melodies were added later by David Fullwood (trumpet), Stally (bari sax), and Birchall (tenor sax). The result, Vin Gordon's African Shores (LP/CD/digital, Tradition Disc, 2019), is a phenomenally good and moody roots album that's similar in sound and vibe to King Tubby's and Lee "Scratch" Perry's mid-'70s output--and showcases Gordon's virtuoso, improvisational playing floating over razor sharp riddims. All of these tracks are relatively spare and uncluttered--allowing for ample space between the notes--and feature almost hypnotic bass lines and beats. The majestic "African Shore" and its "Gold Coast Dub" evoke unending, wide screen coastlines of an extraordinary continent that is the ancestral home for the African diaspora and whose resources, natural and human, were wickedly exploited by white Europeans. "Styler Man" is a ringer for a classic Skatalites tune ("Dubbing Style" is its pair), while "Spill Over" is funky reggae like Jackie Mittoo used to do. I have no idea what the mysterious "Gusum Peck" refers to (its companion "Voodoo Man in Dub" suggests something to do with syncretic religion), but it sounds fantastic, in all senses of that word. Like its title suggests, "Sa La Vie" features a gorgeous, laid-back, "come-what-will" melody (and pace) that's the perfect closer to an album that somehow frees the listener to slow down and experience whatever feelings, memories, or dreams this set of songs conjures up whenever they're played. Here's hoping that Birchall and Breadwinner keep on collaborating with Vin Gordon and showcasing the exceptional talents of this true legend of ska and reggae.