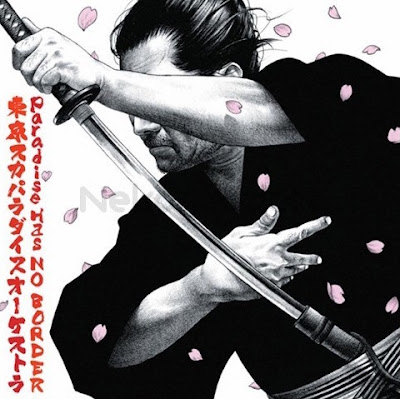 In what may be the most overtly political statement in this famously apolitical band's long history, Tokyo Ska Paradise Orchestra has titled their 22nd album Paradise Has No Borders (which is their second to be released domestically in the USA). By promoting a theme of global, human unity through music in this ugly age of nativism, nationalism, Brexit, and Trump--and creating an album specifically pitched to Spanish language fans in the US, Mexico, Brazil, Colombia, Chile, Argentina, and other points in Central and South America (a shrewd move, as the Latin rock fan base is huge and tends to love their ska)--Tokyo Ska Paradise Orchestra have firmly allied themselves with multiculturalism, the angels, and the right side of history. (And perhaps the title of the album is also meant as a bit of a pun, since 'paradise' is in the name of the band--TSPO literally are not bound by any borders! They tour everywhere!)

Notably, Paradise Has No Borders contains several songs sung in Spanish (another is in English and the rest in Japanese), collaborations with Latin ska acts Los Autenticos Decadentes from Argentina and Inspector from Mexico, and cuts incorporating elements from several genres of Latin and Afro-Cuban music. Of course, since TSPO are one of the most talented bands in ska (or popular music, for that matter), they handle it all with great skill and aplomb. As with most TSPO albums, there is something for every ska fan to like here--practically all imaginable permutations/hyphenations of ska are represented, along with healthy injections of sunshiny '60s AM pop, Henry Mancini/Nelson Riddle-like instrumentals/arrangements, and bits and pieces from any other musical genres that strike their fancy. Highlights of Paradise include the rambunctious instrumental "Skankin' Rollin,'" the joy-filled, sing-along "Routine Melodies Reprise" (see the video below), "Believer" (dig the groovy Latin ska jazz!), the driving, almost 2 Tone-ish "Samurai Dreamers," and "Girl on Saxophone X" (an incredible ska-surf-"Peter Gunn" styled cut).

Tokyo Ska Paradise Orchestra's Paradise Has No Borders is another top notch album from an unstoppable band.

Read The Duff Guide to Ska's review of TSPO's Ska Me Forever album (2015) and our live gig review (with videos!) of a TSPO show here in NYC from 2013.

Lastly, check out this video for "Routine Melodies Reprise" that the band shot on the streets of Austin, Texas during their recent (March 2017) appearance at SXSW.