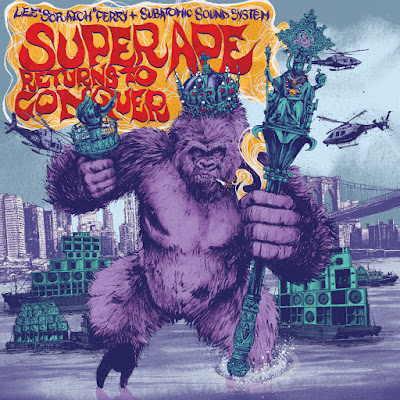 In Steve Barrow and Peter Dalton's "Reggae: The Rough Guide," they declare that Perry's 1976 dub album Super Ape was "one of the most progressive and imaginative sets of its time...Those who dismissed it for being over-produced missed the point entirely" (they also included it in their "Reggae: 100 Essential CDs," noting that "Super Ape, which together with the Congos' Heart of the Congos represents the fullest single album realization of the producer's unique vision"); and reggae reviewer/historian/selector David Katz called it "a veritable tour-de-force of Upsetter wizardry." In other words, Super Ape is one of Scratch's masterpieces (created at his legendary Black Ark studio, along with extraordinary roots classics like Heart the Congos, Max Romeo's War Ina Babylon, The Heptones’ Party Time, and Junior Murvin’s Police and Thieves)--which begs the question, why re-record it (and risk creating something inferior)? When the Jamaica Gleaner recently posed this question to Perry, he answered: "Well, my music comes from God. Me nah copy no man. Me listen to nature and the sounds of nature are God's music. So, my music is God's music and it will never get old and it will never die." (Ah...got it.)

Of course, before reviewing Super Ape Returns to Conquer, I pulled out my copy of The Upsetters' Super Ape to refresh my memory of the original tracks and compare them to the new takes on this material. What was truly revolutionary in the evolution of dub in 1976 still sounds brilliant and unearthly in 2017, yet also a bit tamer than expected, since both Perry and dub have progressed in all sorts of incredible ways in the 40 years since. After listening to both albums, it's clear that Super Ape Returns to Conquer is in no way an attempt at a note-for note/effect-for-effect recreation of the original (even the running order is jumbled)--it's simply a fresh and inspired interpretation of these tracks from this vantage point in time, experience, and technology.

Partially recorded at Perry's New Ark in JA and co-produced by Subatomic Sound System's Emch (who also played melodica, guitar, bass, keys, beats, and effects), the album features Subatomic Sound System members (who have backed Perry live since 2010) Larry McDonald (congas, percussions, vocals), Screechy Dan (vocals), Jahdan Blakkamoore (vocals), Omar Little (trumpet, cornet), Tory Shaka Simms (sax), and, of course, Perry on vocals and at the controls--these shimmering new recordings bring a clarity, expansiveness, depth, and sheer amped-up power to the often mesmerizing versions of these familiar songs, while maintaining the organic warmth and sonic inventiveness one expects of Scratch ("So It Conquer," a short new song apparently recorded live in concert, has the sound of ocean waves in the mix!). Everything sounds terrific--"Zion's Blood" (which still uses The Heptones' vocal track), "Chase the Devil," "War Ina Babylon" (Max Romeo appears on tape here, too, methinks), "Super Ape," "Underground Roots" (with Ari Up of The Slits in what must be one of her last recordings), "Dub Along," and "Three in One" all absolutely shine in their new iterations (and the album includes dubs of some of the vocal tracks--"Croaking Lizard," "Black Vest," and "Dread Lion" in particular are incredible).

So, while Super Ape Returns to Conquer may not be as historic or groundbreaking as its source, it comes mighty close to being its equal and is definitely a vital new entry in Perry's astounding body of work.