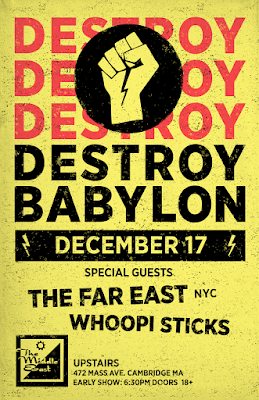 We're very much looking forward to two upcoming new releases that are slated for early 2017--the fifth album from Boston's incredible roots reggae act Destroy Babylon and the second cassette tape from their dub spin-off the Flying Vipers (there's a video teaser for "Dubbin' in the Den" here).

(Read what The Duff Guide to Ska thought of Destroy Babylon's most recent album Long Live the Vortex here and the Flying Vipers' debut The Green Tape here.)

And if you're in the Boston metro area, make sure to check out Destroy Babylon's next show at The Middle East on Saturday, December 17, 2017 with NYC's The Far East and Boston punks Whoopi Sticks! All the details are in the awesome Tom Robinson Band-inspired flyer to the right...