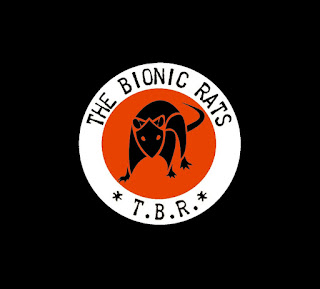 The Bionic Rats T.B.R. (CD/digital download, self-released, 2016): If Rock Against Racism stages a comeback--and God knows we need them more than ever on both sides of the Atlantic--Dublin's phenomenal The Bionic Rats have two powerful anti-racist anthems ready for the RAR playlist, as well as a slew of other terrific ska, rocksteady, and reggae songs about enduring the slings and arrows of work, love, and life, on their amazingly good fourth album T.B.R. (the acronym reminds me, in my dyslexic way, of the Tom Robinson Band!). The ska-jazzy, but kind of spaghetti Western-ish "One More Nail in the Coffin" lays out The Bionic Rats absolute determination to counter the forces of fear and hate: "Climb up the ladder, get to the top/We'll never stop/One more nail in the coffin, one more nail/'Til all superstitions are dead in the ground/We'll never stop/One more nail in the coffin of ignorance." Even better may be the biting, minor-key lament "Half a Mind," which is similar in vein to Linton Kwesi Johnson's fierce anti-fascist/anti-National Front cut "Fite Dem Back" and is equally on the mark: "Now it wouldn't happen all the time/But you hear them talking about their kind/While they seem intelligent otherwise/I never fail to be surprised/Every time I hear their bile and see the poison in their eyes/They can never justify their lies but they try, oh yes they try/If they had half a mind maybe they could could use it/Take up too much of their time, too confusing." But it's not all about manning the ramparts against the bigots. The shiny and upbeat ska tune "I'm Doing Good" is an ode to the office workers of the world slaving away in their cubicles for someone else's big gain (complete with work-induced grunty vocal effects--shades of, um, "Allentown"!): "I'm doing good today/I'm making someone else some money...I'm doing good today/Hit all my targets this week/I'm doing good today/I worked right through my lunch break/I'm doing good today/I'm such a good employee/I'm doing good today/I'll still be here when it's late/I'm workin' it/I'm livin' it/I'm losing it/Each day at a time." "Say Something" urges bands to use their platform, large or small, to communicate something meaningful (amen to that--I'm all about the lyrics, too). "Until I Forget" is about struggling with drink--and references my favorite Homer Simpson quote ever on the subject. The band won't let you wallow in regret over how you completely blew it in the dubby "Shoulda, Coulda, Woulda"--'cause you know better. And the 11 year-old lurking within me loves the "dilemma" inferred in "Girls With Big Hands." The Bionic Rats' T.B.R. is by far one of my most favorite albums of the year--and fans of bands like No Sports or The Toasters should make a point to check it out!