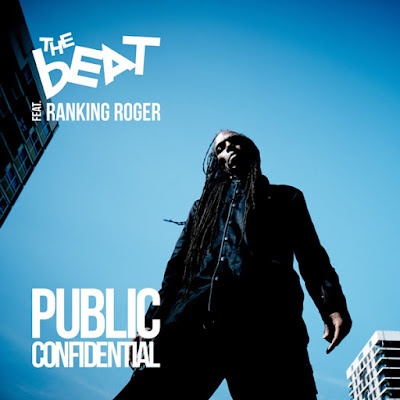 It's a bit of bad luck/timing that The Beat Featuring Ranking Roger's pretty sensational Public Confidential was released around the same time as The Specials' Encore, as all of the hype, press, and "controversy" (not all original band members involved; many new tunes don't attempt to recreate Specials' trademarked 1979-1981 2 Tone sound, etc.) over that terrific record will surely overshadow The Beat's. One can only hope that the great success of The Specials' album (#1 in terms of album sales on the Official UK Charts as I write this) will whet both active and dormant ska fans' appetite for even more new music from 2 Tone era-bands--and they'll seek out this incredibly good record.

As with The Specials, who musically quoted "Ghost Town" for new tracks "Vote for Me" and "B.L.M.," there's a bit of DNA from earlier Beat hits in Public Confidential ("Maniac" and "Who's Dat Looking" nick some "Mirror in the Bathroom" and "A Good Day for Sunshine" essentially versions one of the Beat's top songs, "Best Friend") to demonstrate to the fans that they're keeping faith with the band's classic I Just Can't Stop It sound (particularly the great and late Saxa's ethereal horn lines and the manic rhythm section with its roller coaster bass riffs) and to ease their entry into the new material constructed on the old. In one or two brief instances, it seems a bit blatant and contrived, but overall doesn't detract/distract, as the cuts themselves move into compelling new directions quickly. What's even better are several of the new songs here that don't rely on old musical reference points, but are completely brilliant and Beat-like on their own (see "Public Confidential," "On the Road," and "Dangerous," amongst others).

Roger's version of The Beat continues to be engaged and concerned with the world around it. The driving and effective "Maniac" is about being pushed closer to the brink by right-wing/authoritarian-minded leaders like Trump and May (who are the unhinged ones referenced in the title, not the singer): "Don't dictate what I can or can't say/Clean your streets of me, you discriminate/Take away every right to fulfill our roles...Create fear, create the enemy/Don't you tell me how it's meant to be/You need to calm me or I detonate/You've got me ticking..." In the same vein, "Who's Dat Looking" is outraged with the total-information-awareness surveillance state--with how everything we do in both the real world and online is tracked, then monetized or weaponized, leaving citizens without any privacy or control: "Watching me like I've committed a crime/You're thinking of ya bugging me/You say it's for my safety/But nothing's gonna make me buy into your society/Say, who's dat looking?/Look into the sky like a million eyes/Got a remote control key in my back/With no invitation you're checking my location/The privacy you track, you attack/Say, who's dat looking into my eyes?"

But there's hope and power in the people (as there always is in the ballot). The amazing "Public Confidential" is about imagined crusaders at a muck-raking tabloid, advocating for the people and holding the powerful accountable: "We take responsibility because we care/We find a helping hand, that's when it goes missing/They can try stopping us if they dare/Remember, ain't gonna let ya, we're gonna get ya/Eye on critical, the street don't lie/Nobody gonna close our eyes/We're public confidential, we're public potential/'Cause we should know what's going down!"

The pros and cons of touring are recounted in "On the Road" (co-written and with shared toasting by Roger and his son Ranking Junior): "Say every weekend got a show/That's why I'm always on the go-go-go...Every single weekend me pile inna van/Traveling across the United Kingdom/Me a share a can with plenty fan/They a say me give dem a inspiration." It's a bit of a thrill when Roger works in "I just can't stop it" into his lyric as he describes the charge he gets out of performing forty years after The Beat's debut. In "Dangerous," Roger essentially reclaims the 2 Tone meaning of rude boy--it's about making music not crimes ("A who dat man?/A who dat a come?/'Cause any time he come I say him well troublesome/A who dat man?/A who dat a come?/'Cause I'm a Ranking Roger with the sound that go down...You think you is a bad man when you flash me your knife/Next thing me hear you take another man's life/Well dem boy say is dangerous/Artificial and dangerous...").

One song that is guaranteed to buoy one's spirits when they're down is "A Good Day for Sunshine"--a minor miracle of a cut in that it captures and conveys the feeling of being in love and completely happy/contented and wanting to share that with everyone you meet ("Feels good/because you're mine...I want to catch the sun/Put in my pocket for someone/And make everything alright/'Cause it's a brand new day/And we know it's not about the weather/'Bout a feeling that's coming my way/I'm getting ready for the sunshine of mine"). This cut and either "Maniac" or "Who's Dat Looking" would make a dynamite double A-sided single.

All in all, long-time Beat fans will find Public Confidential to be a completely satisfying and enjoyable record. It builds on the many strengths of Bounce and sounds more like a Beat record than Dave Wakeling's recent and superb Here We Go Love (which had a strong General Public vibe running through it). Public Confidential was recorded before Roger's dire health issues were diagnosed and being treated (two brain tumors, both of which have been removed, and lung cancer, for which he is undergoing two years of immunotherapy)--his singing and toasting are spot-on throughout (he's in really terrific form) and his Beat band is first-rate.

We fervently hope that Roger will be in good health soon, as well as be able to perform some of the wonderful songs on this record at any 2 Tone 40th anniversary events held during this milestone year.

Well stated, all throughout -- there’s not a whole lot that I could add, apart from saying that I’m really glad to hear that you’re digging the album as much as I am, and as much as I thought you would.

One of the [many] highlights of the album, for me, are the sax lines from Chiko Hamilton -- he obviously and deeply understands what made Saxa’s playing so incredibly special.

As for the timing coinciding with the release of Encore from The Specials... there was plenty of room for 2Tone records in 1979 and, for me, there’s even more room for this stuff now, in 2019. I wouldn’t argue with a new Madness album this year! I see Encore and Public Confidential complementing one another, much more than competing with each other. And, perhaps more impressively, complementing each other without coming across as appealing strictly to nostalgia or sentimentality -- both albums possess vitality, which is the sort of thing that returning artists and reunited bands seldom possess. Encore and Public Confidential are drenched in vitality!

Here’s hoping for a long future of new releases from Ranking Roger!

Thanks for your comments, Mark!

Best Beat album. Ironically like Joe Strummer. I guess it's an afterlife thing.

I loved seeing him in concert with his latest group members. Musically brilliant. Tragic that he and they were unable to play these new tracks live. A huge loss indeed.

I totally agree. I just wish more people would know and listen to both masterpieces