Duff Book Review: "Before We Was We: Madness by Madness" 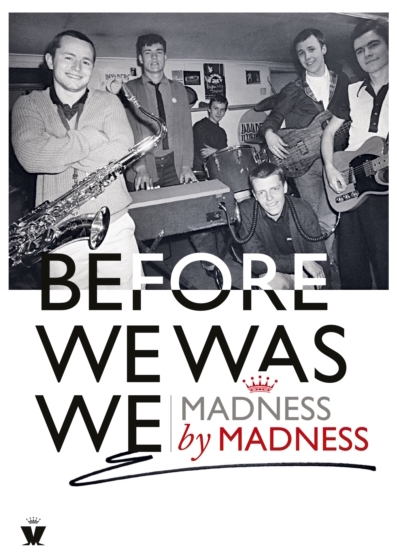 I remember when I first split open the cellophane on my original copy of Madness' One Step Beyond... LP and being struck by all the strips of photo booth pictures printed on the inner sleeve of what I assumed were people--kids, really--from the band's circle of friends (who were these guys with nicknames like Prince Nutty, Totts, Whets, Chalky, and Toks?). There was something so wonderfully normal and non-rockstar-ish and authentic about it all. But it also spoke to an insider-ness, of being in on the joke that--in addition to their unapologetic working class Britishness--was somewhat inaccessible and foreign (in the sense of unfamiliar, without reference points) to this suburban American kid. They were these small mysteries about Madness that I would never understand--you had to be part of their gang to get them.

And gang really is the right word here. A good portion of Before We Was We: Madness by Madness consists of inseparable childhood friends Mike "Barso" Barson, Lee "Kix" or "Thommo" Thompson, and Chris "Chrissy Boy" Foreman recounting their wild (and sometimes wildly dangerous) teenage exploits together, many of which involved petty crime (successful techniques are shared): breaking into laundry, phone, or heater coin boxes; sneaking into movies like "A Clockwork Orange" and concerts by Roxy Music and Ian Dury's Kilburn and the High Roads (often by climbing up the sides of buildings via drainpipes to enter an open window or another access point on the roof); shoplifting clothes and records (Barson says he accumulated over 300 LPs without ever having bought one--and his mum never asked how this came to be) and almost anything else not bolted down (in one hair-raising episode, Thompson poses as mannequin in a shop window to avoid being nabbed by the cops); and joyriding on the occasional, ahem, "borrowed" scooter. There also was a lot of jumping on the freight or "goods" trains that cut through their then still Blitz-ravaged north London Camden Town and Kentish Town neighborhoods (dotted with bomb craters and bombed-out buildings), a bit of boot boy street violence, and lot of spray-painting their graffiti tags in highly visible spots that helped them gain some notoriety among their peers. (Mark "Bedders" Bedford, Graham "Suggs" McPherson, Dan "Woody" Woodgate, and Cathal "Chas Smash" Smyth were drawn into their orbit later through these exploits and then their pre-Madness band The Invaders; they, of course, share their stories, too.)

As you might imagine, there are a lot of great tales, very well-told in Before We Was We: Madness by Madness. It's a phenomenal, wonderfully compelling, and completely enjoyable oral history of the band that conveys their individual and collective stories from birth through the recording of Madness' debut album, their first three smash hit singles ("The Prince," "One Step Beyond," and "My Girl"), and Madness' inaugural tour of America in 1980 (where they encounter and go ga-ga for the Go-Gos, as do several of the other 2 Tone bands who venture to the USA)--and is an essential component of 2 Tone history (to go along with Daniel Rachel's Walls Come Tumbling Down, Paul Williams' You're Wondering Now, and Pauline Black's and Ranking Roger's respective autobiographies).

Through all of these anecdotes, the reader comes to know (and love) this group of brilliantly funny, whip-smart, thrill-seeking, talented, and raffishly charming young men from working-class families with mostly absent fathers and almost nil adult supervision, and marvel at their improbable rise from almost Dickensian origins to become one of the most successful British pop acts ever (releasing twenty Top 20 singles and selling over 6 million singles during the 1980s alone). And they share their keen awareness that giving The Invaders/Madness a go came at a point in their lives when their only other options were looking more and more like prison (the punishment for their crimes was becoming more serious as they entered adulthood, as Barson came to realize) or soul-crushing, dead-end jobs (Suggs recalls a point early on when he wasn't taking the band seriously and was let go--and then being in the audience for one of their shows and realizing that he had to do anything he could to get back in it, as it was the only thing worth doing in his life).

Mike Barson, in particular, emerged as the driving force behind the band, pushing everyone to their fullest potential, and has the best insight as to why they had spent so much of their teen years in pursuit of illicit and sometimes life-threatening kicks (all of which was eventually channeled into the band): "For us, there was some sort of quest to find something special, or something exciting. There was obviously something psychological about it. I mean, we all came from broken families, pretty much. So probably that ties in with wanting to be special and wanting to be something different."

Like Patti Smith's portrayal of a long-gone NYC gone to seed in the '60s and '70s in Just Kids, Before We Was We captures a London that no longer exists--and is almost unimaginable now--where you could get by on next to nothing, which gave one the opportunity and space to create, take risks, and hone your art along with a host of other artists, musicians, and writers, each trying to do their own unique thing. So much of what took place in their formative years, the extraordinary freedom they had coupled with their adventurousness (they rode freight trains across England and France), a drive to experience something new, and fear of being merely ordinary--all of which shaped what became the minor miracle of Madness--seems like something unattainable in our helicopter parent, surveillance state, personal brand/social media-obsessed, predatory-capitalist/monopolistic, lowest common denominator mass media age.

After you read Before We Was We: Madness by Madness, definitely make sure to break out your copy of One Step Beyond... With all of this new background on the band and fuller context for many of their original songs on their debut album (like "Bed and Breakfast Man," "Land of Hope and Glory," "In the Middle of the Night," etc.), you're likely to find that it's a richer listening experience, and that some of the tracks are now more profound. And maybe you'll even be able to imagine that you're just a bit closer to being a part of Madness' gang.

Your review captured every reason I loved this book. Parts I could relate to - the universality of youth? - and other parts were like dispatches from an alien world. I've been a fan since I bought that first album the week it came out in the states and I thought I knew their story well. Well, I didn't. But I'm glad I read the book before I get to see them for the first time this May in NYC. Great job, Steve! OSB!

Thanks so much for your thoughtful comments and kind words about the review, Charles! Looking forward to seeing you and Madness in May!