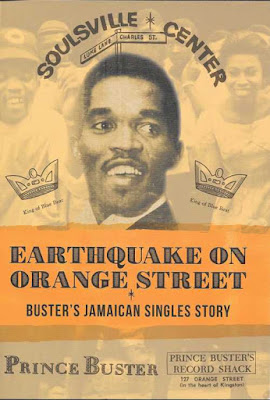 Even though there have been some excellent to superb Prince Buster compilations released over the years (see the Gaz Mayall-selected King of Ska; the Islam Records release Hush Up!; the expanded Sequel Records edition of FABulous Greatest Hits; the Rock A Shaka comps Voice of the People, Dance Cleopatra, Let's Go to the Dance, and Roll On Charles Street (read my review); and most recently, the incredible Africa - Islam - Revolution (read my review)), they're only scratching the surface of Buster's extraordinary output in his career as producer, performer, and label head. From 1961 to 1977, he released (by my imperfect count) over 440 singles in Jamaica (not including reissues) on his various imprints--Buster Wild Bells, Voice of the People, Prince Buster, Soulsville Center, Islam, and Olive Blossom, plus there were a good number of blank paper label releases. The vast majority of these tracks also were licensed and issued on 45s in the UK on Melodisc Records' imprints Blue Beat and FAB, and fueled his great popularity there with the mods. Since the JA music industry was 45-driven, Buster never compiled and issued his work and productions on LP himself--though he repressed the eight albums that Blue Beat/FAB originally released in England (I Feel the Spirit, National Ska: Pain in my Belly, Fly Flying Ska, What a Hard Man Fe Dead, Jamaica's Pride, Prince Buster On Tour, She was a Rough Rider, and FABulous Greatest Hits).

While reissues of reissues of Buster's Blue Beat/FAB LPs are relatively easy to find (I've collected them all over the years), the majority of his singles have not been re-released and the original pressings--and even some re-pressings--that you can sometimes find in the wild can be very pricey. Of course, Discogs is a vital resource for sorting through Buster's catalogue, but it can be a bit unwieldy if one isn't solely looking at individual releases. Even though significant parts of Buster's story have been documented (mostly in liner notes for some of the aforementioned compilations, though Lloyd Bradley's book This is Reggae Music: The Story of Jamaica's Music and Laurence Cane-Honeysett's feature "The King of Ska and More" in Record Collector issue 459 are terrific, invaluable exceptions), his extensive biography remains to be written (and I'm still waiting for an exhaustive Prince Buster box set to be issued!).

Thankfully, another vital aspect of Buster's story has been meticulously assembled by UK sound system operator Jeremy Collingwood (Lick It Back) in his Earthquake on Orange Street: Buster's Jamaican Singles Story (which was released a few years ago, but I recently obtained a copy through Copasetic Mailorder in Germany). As its title suggests, this book provides a comprehensive listing of all of Prince Buster's JA releases on all of this imprints from 1961 to 1977, including both JA and UK catalogue numbers (just to make things complicated, the Blue Beat and FAB singles rarely mirrored the JA ones), and a "Blank Checker" guide that will help you identify which tracks are lurking on those blank paper label releases. To introduce each year's batch of 45s, Collingwood provides excellent overviews of which imprints were in use, notes key/popular singles (and gives them some helpful context), highlights newsworthy Buster events, and even indicates the location Buster was operating out of, since his shop moved several times over the years, starting at 49 Charles Street and ending at 127 Orange Street. In addition, there are eleven glorious pages of full color scans of various original paper labels (ragged from age and use, but still magnificent) from all of Buster's imprints, as well as a few more pages with scans of unused and recycled paper labels.

Earthquake on Orange Street: Buster's Jamaican Singles Story is an invaluable resource for Prince Buster fanatics/collectors and anyone researching and writing about the great man--but even more casual fans of 1960s JA ska will find much to like/love and learn about in this book and should definitely track down a copy while they're still to be had.