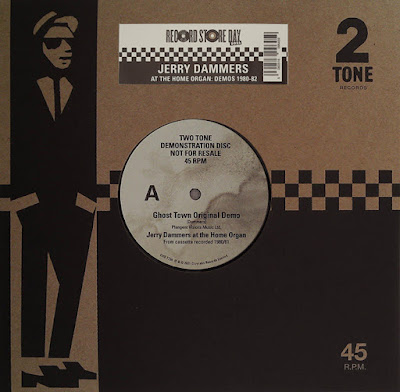 Issued in the UK as part of the second 2021 Record Store Day drop (cue the evergreen complaints about RSD), Jerry Dammers' At the Home Organ: Demos 1980-82 (10" vinyl single, 2 Tone/Chrysalis, 2021) is as advertised--these are his DIY instrumental demos of The Specials' "Ghost Town" and Rhoda Dakar with The Special AKA's "Theme from The Boiler" performed on his "home entertainment type organ." These recordings, mastered from their cassette originals (and which feature pretty good audio fidelity), are really for Specials completists, as there's nothing immediately revelatory here. Having said that, there's something wonderfully intimate and thrilling about hearing Dammers' playing this early, more muzak-y version of his masterpiece "Ghost Town" (think "Stereotype, Part 2"--yet it's also B-horror movie-sounding) that doesn't yet include the bright, major key "Do you remember the good old days before the ghost town?" bridge. We weren't ever meant to hear this--but it's fascinating to compare it to the studio recording and note how producer John Collins helped shape the extraordinary final product. And this demo of "The Theme from The Boiler" with John Shipley (The Swinging Cats, The Special AKA) on guitar is unexpectedly fleshed out and pretty fantastic. Since the bloodcurdling "The Boiler" was only meant to be heard once, this 45 is rarely pulled out to play. Which is a shame, as I've always thought that the studio version of "The Theme from The Boiler" is a superb and jittery dance floor-filling cut that should be spun frequently. Hopefully, this demo's inclusion will bring some renewed attention to this gem.

The paper label for At the Home Organ doesn't feature Walt Jabsco (the cardboard sleeve does), though it's designed to look worn and slightly mildewy, as if these faux demo-only singles were recently rescued from a forgotten box in a damp cupboard--a nice touch. As a Specials/2 Tone fan, I'm quite happy to have Dammers' At the Home Organ in my collection. Get 'em while you can.