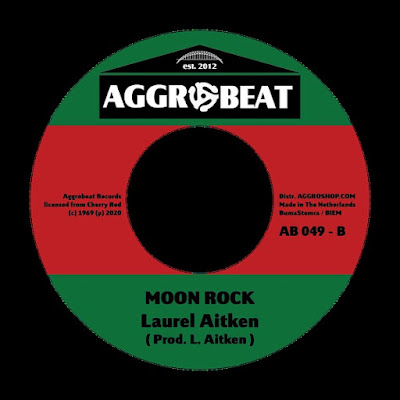 Since 2020 and continuing through this year, Aggrobeat Records in the Netherlands has been reissuing a series of fantastic skinhead reggae vinyl singles both from and written/produced by the incomparable Laurel Aitken--all of which fans of this era of reggae music will desperately want safely nestled in their 45 box(es). (Disclaimer: The Aggrobeat shop is carrying copies of my book The Duff Guide to 2 Tone.)

Laurel Aitken (who was then based in the UK) was particularly prolific from 1969 through 1971 (see the truly extraordinary 5xCD compilation Skinhead Train Pressure Drop/Cherry Red released in 2020 containing every Aitken cut and production he released in 1969 and 1970--138 songs in total!). During this time, Aitken issued dozen upon dozens of singles for Pama and its imprints Nu Beat/New Beat, as well as the Trojan subsidiary Doctor Bird (some of my faves from this period include his essential High Priest of Reggae LP and some of his greatest singles: "Heile Heile (The Lion)," "Fire in Mi Wire," "Skinhead Train," "Rise & Fall," "It's Too Late," and the sublime "Reggae Prayer,"--the perfect fusion of the sacred and the profane--which will be played, appropriately enough, when I slip this mortal coil decades from now).

Aggrobeat's reissue series features Aitken's 1969 blank label/promo single for Nu Beat "Benwood Dick" b/w "Apollo 12." The A side is a hilariously rude--but never explicit--cut about "a man with a long, long cukumaka stick" (though Pama got cold feet, benched this single, and instead issued the less overtly rude, but still slightly naughty, "Mr. Popcorn": "Some like it hot/I like it warm/That's why they call me Mr. Popcorn!"), while the flip is his moon stomping classic "Apollo 12" (one of several skinhead reggae sides inspired by the first lunar landing, including Derrick Morgan's "Moon Hop"), which sets another goal for humanity (which we haven't quite achieved): "Skinhead moon invasion/Leaving from shantytown, Brixton/It's not black/It's not white/It's what's right/Everything will be alright/If we just unite!" (Back in 2011, Jason Lawless (RIP) also licensed "Apollo 12" for his excellent Moondust series of singles, though the flip was "Moon Rock.")

Originally released as a blank label through the Trojan imprint Ackee in 1969, the Winston Groovy "Skinhead Wreck the Town" b/w Laurel Aitken's "Moon Rock" single features two great tracks written and produced by Aitken. Winston Groovy (whose most famous song is probably "Please Don't Make Me Cry," which was famously covered by UB40 on their first and best Labour of Love LP) decries skinhead thuggishness on this anti-rude boy violence cut that borrows a bit of Desmond Dekker's "007" (see the Trojan compilation Rudies All Round for more "rude boy records"). "Moon Rock" continues the late '60s pop-culture fascination with the moon landing with Aitken's offbeat imagining of what one would do with one ("When you smoke the moon rock/You say, "Sistah, I am your mister!...Why, what a ting, like this moon rock/Strong like a lion/Make you feel to go back/To Mt. Zion!"). Aitken's friend Rico Rodriguez contributes a lovely trombone solo, too.

The Versatiles "Pick My Pocket" b/w The Freedom Singers "Freedom" 45 was released in 1970 on Nu Beat and features more amazing Laurel Aitken compositions/productions. "Pick My Pocket" is a supremely catchy tune warning all who can hear about being taken in by a pretty girl whose sole intention was to rip him off (and the song briefly and deftly quotes Toots and the Maytals' "54-46 (Was My Number)"). The almost hypnotic "Freedom" is simultaneously about deliverance from slavery/Babylon and repatriation ("I wanna go back") to Zion.

Another "rude record" featuring Aitken compositions/productions, The Versatiles "Give It To Me" b/w Tiger & The Versatiles "Hot" issued on New Beat in 1971 is full of suggestive lyrics to titillate. "Give It To Me" is exactly what you think it's about ("You say you want it now/Well, I'm gonna push it up!"), while "Hot" is more boastful than bad: "My love is like quicksand/The more you're in it/The deeper you'll sink!" (Later that year, Tiger had a hit with the Aiken production "Guilty," which UB40 also covered on Labour of Love.)

The two non-Aitken produced singles in the Aggrobeat series (so far!) are The Gladiators' rocksteady tracks "Socking Good Time" b/w "I'll Take You To the Movies" issued by WIRL in 1968 with a blank label (the latter has some sweet harmonizing), and The Royals "Pick Out Me Eye" b/w "Think You Too Bad (AKA Mind Yourself)" released on Trojan in 1969 (the latter is a version of The Pioneers' "Jackpot," which, of course, was covered by The Beat).

This is an incredible opportunity to obtain some high-quality vinyl reissues of some rare and wonderful skinhead reggae music. Don't let it pass you by.