Duff Review: Danny Rebel & the KGB: "Toss It Up" 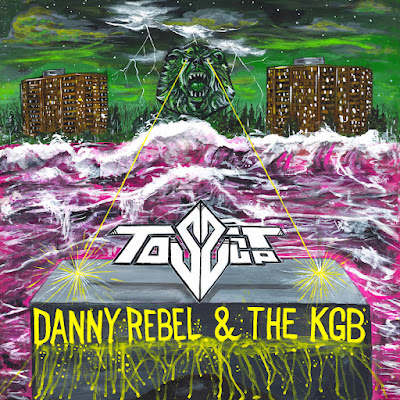 It might be a bit grandiose and/or passé to call Danny Rebel a Renaissance man, but he's such a gifted singer, songwriter, musician, performer, and painter (who the cap fit...). His latest album with the KGB, Toss It Up, doesn't disappoint. It features five new super-catchy, funky-reggae-rock (and rocking!) songs about love, lust, and lust for life, and a corresponding number of dubs--all of them spectacular--by Victor Rice.

Everything opens with the wickedly dangerous title track (what a heavy groove!) that's part throw down ("Been waiting here too long and I’m about to grab the mic/Got to lick the spoon clean always put up a fight"), part mission statement (you'll never make anything of your short time on Earth if you don't at least keep hammering away at whatever it is that you love doing).

The plaintive but resolute "Move" is about being completely fine with leaving a bad relationship and all of its baggage behind ("Time to walk on from you/You’ve been a dark cloud on me"), and while "Ugly" is not a Fishbone cover, it concerns a similar hideousness/nastiness hidden from the world inside one's heart.
"Crossfader" is soulful and sincere love song that pledges love and fidelity, with some self-aggrandizing lyrics thrown in so she knows what she's got (and to warn off any contenders for the throne):
Musical sound’s called crossfader
My guitar is my Deathstar and I’m the lyrical Darth Vader
Riddim maker, KGB-wise
Watch the fire burning through my eyes
If one and one makes two, then I will never make you blue
And baby don’t you know that I will never turn my back on you
This old heart of mine, don’t need no riddim or no rhyme
Will be with you as long as I live, yeah I know I will never leave you alone
Even if you don’t answer your phone, I will be there

Released as a single earlier this year and employing a term for female genitalia that I've never encountered before, "Whispering Eye" is unapologetic in its direct and unadorned expression of lust ("We don’t need this love (I’ll save you the pain)...You don’t have to call (just call out my name)...All I really want is your whispering eye"). As one wry FB commenter replied to Danny about his new song at the time: "rent a room!"

Want more? Read my reviews of Danny Rebel & the KGB's Lovehaus, For Babylon's Head, and Spacebound.