Duff Review: Out of Control Army "From Mexico to the World" 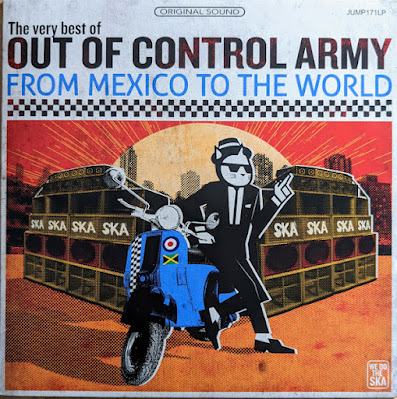 By all indications, the Mexican ska scene is massive, and the reason you've seen top name ska acts (like Tokyo Ska Paradise Orchestra, Madness, The Selecter, and Bad Manners) bypass much of the US in favor of playing festivals there. With this in mind, Jump Up's Chuck Wren, who seems to have his finger on the pulse of every ska scene, has just released a killer new compilation from Mexico City's Out of Control Army (led by Deals Olan, who's played with The Toasters and Bad Manners) titled From Mexico to the World.
For this release, Wren selected some of the best cuts from Out of Control Army's three most recent albums (Cat Nation (2018), The Spooky Ska Orchestra (2019), and Una Noche En Las Piramides (2021)) that reflect the band's love of--and great proficiency in---British 2 Tone and '60s Jamaican ska. Highlights include brass-heavy, Scofflaws-like original instrumentals like "El Chulo" (which features a beautiful piano intro; its title translates to 'bad-ass,' among other meanings), "One Note Samba," and "Tenor Madness"--and the pumped-up, Tokyo Ska Paradise Orchestra ska-jazz of "Lilith."

Out of Control Army also ratchets things up with raucous, knees-up 2 Tone ska tracks, such as "Unity" (with King Hammond--who declares, "we are living in troubled times, what the world needs now is love, love and unity!"--and Los Furios), "We Do The Ska" (with Neville and Sugary Staple, and members of Oreskaband and Kingston Rudieska), and "Global Ska." There's even some lounge-y, Rat Pack ska with their cover of "Just a Gigolo" and the big band-sounding "My Darling."

All in all, Out of Control Army's From Mexico to the World is a blast and shouldn't be missed!

Bonus cut: Check out Checkerphil, the host of the long-running Manhattan cable access music show Checkerboard Kids, along with Deals Olan and Daniela from Inspecter 7, in the new Out of Control Army video for "Dance Jerico!" that was shot on various locations in NYC.