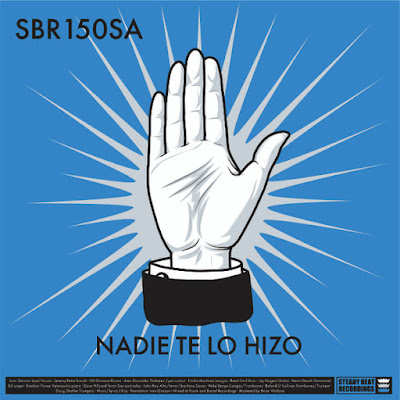 Eric Blowtorch is always doing interesting and unconventional things out in his home base in Milwaukee. For the past decade or so, Blowtorch has been on my radar with incredible releases like 2018's 12" EP Horace Andy backed by Welders "Straight To Hell" and Big Youth backed by Welders "Pair of Dice" b/w Horace Andy v. Big Youth "Asylum Seekers" and Eric Blowtorch "Christmas in Ladbroke Grove" (read my review here) and 2021's triple LP (!) Quality Items (read my review here). But I feel like a dope for not realizing much sooner that I've heard his stuff going back to the '90s with his involvement with Highball Holiday (who released an album on Moon's Ska Satellite Records imprint that I ran and were featured on my comp Skarmageddon 3; and Highball Holiday are now back in action, by the way!).
With an opening guitar riff borrowed from Andy & Joey's "You're Wondering Now," Blowtorch & co.'s great digital single "Sanctuary City," is about welcoming refugees on America's southern border fleeing dictatorships and drug gangs ("Come one, come all/Lift your heart/Crack open the wall/Gunmen on the other side/But maybe love and amnesty, too/Sanctuary city opens/Millions of arms to you"). This track, released just weeks into Russia's appalling invasion of Ukraine, takes on even more significance with millions more people fleeing chaos, death, and destruction in their home countries. The question remains if America can ever find its bearings again to champion human rights and fully welcome and embrace large numbers of refugees from around the world, no matter what their color or religion. ("You're wondering how you should pay/For the way you did behave," indeed.) A portion of this single's proceeds is being donated to the International Rescue Committee, which was founded in 1933 at the suggestion of Albert Einstein (a refugee himself) to help people fleeing fascism in Germany, Italy, and Spain.

It's really heartening to see singer/songwriter extraordinaire Mitch Girio return with new music from his incredible King Kong 4. It's been two years since Punch It, KK4's brilliant compilation of singles, was released by Jump Up (read my review here), and during this period Girio suffered from a virus that caused some sort of brain injury. Thankfully, he's recovered and back in action. This time out, in his fantastically searing "Paper Sky" digital single, Girio sings about an embattled relationship where there's no shelter from the biting lyrics or the metaphorical bombs that rain from above (I can't help from associating this song with nuclear war with Putin's recent threats to use the bomb):
Here we go as we run for cover
Somewhere underneath a paper sky
Is there a place that's the same for lovers
Who never really try?

And you will give your word
Then try to break it

This ska-rock track--shades of Emotional Fascism (aka Armed Forces) era Costello--culminates with an unexpected and thrilling, kick-ass instrumental outro.

Girio also has contributed a hauntingly lovely cover of Umbrella Heaven's "Soulmate" ("Breaking my back for you/You never asked me to") to Perverted Pleasures, a new tribute album to this cult 1990s UK indie rock band.

Smoke & Mirrors Soundsystem's quest for world dominance continues with a cracking new single released on Steady Beat Recordings. (If you don't believe me, check out the slew of records that have come out since their debut 2021 album Strength in Numbers--singles on Badasonic ("Second That Emotion" b/w "Mad World"--read my review here), Liquidator ("Mi Vida Sin Tu Amor" b/w "I'm a Man"--read my review here), and a forthcoming 12" on Jump Up Records featuring Roy Ellis and Monty Nesmith.) As Luis Correa's Steady Beat often focuses on Latin sounds, Smoke & Mirrors Soundsystem's new 7" picture sleeve single features two super crisp Spanish-language Latin ska cuts: John Roy's original "Nadie Te Lo Hizo" b/w a cover of Willie Colón and Hector Lavoe's 1973 salsa cut "El Dia de me Suerte." The theme running through this release is essentially that you should seize the day (side A's title in English is "Nobody Did It To You"; the flip is "My Lucky Day," a tale of passivity in the face of life-long woe: "Soon my lucky day will come/I know before my death/My luck will surely change"). With a never-ending pandemic, worsening global warming, and the looming specter of WWIII, it's probably time to lead your best life while you can. Everybody's got an expiration date.
+ + + +
Posted by Steve from Moon at 11:11 AM