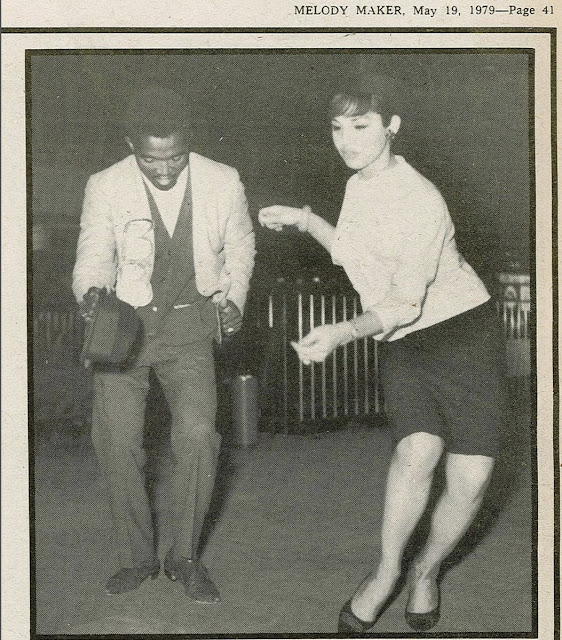 Blue Beat Baby: The Untold Story of Brigitte, a new 30-minute video documentary by Joanna Wallace, does an excellent job of piecing together the largely forgotten story of Brigitte Bond, who inadvertently inspired the design of The Beat girl. While the average ska fan knows 2 Tone's Walt Jabsco was created by Jerry Dammers (and refined with help from Horace Panter and John "Teflon" Sims) and based on a photo of Peter Tosh from his early Wailers' days, far fewer are aware of the origins and background of The Beat girl.

In Blue Beat Baby, Wallace explains that Brigitte Bond was a popular Soho burlesque performer who showed up to welcome Prince Buster at Heathrow Airport in 1964 during his first tour of the UK (to promote I Feel The Spirit). In the process, she was photographed and filmed dancing with Buster in the terminal (most likely a calculated move to help generate press for her then forthcoming single and supporting gigs). A little over a decade later, one of these photos was re-published in Melody Maker in the spring of 1979 (see it above), just as 2 Tone started to rule the airwaves and charts. Cartoonist/graphic artist Hunt Emerson, who was tasked by The Beat to quickly come up with their logo (and later designed the covers of the first two Beat albums), spied the photo of the beautiful and fashionably mod Bond dancing with Prince Buster and modeled his striking--and now iconic--Beat girl illustration on her. Notably, neither Hunt Emerson nor anyone in The Beat was cognizant of Bridget Bond's claim to fame. Emerson was drawn to her elegant sense of style and the wonderful motion of her hips, arms, and legs captured in that phenomenal photo.

Employing archival newspaper clips, strip joint advertisements, and TV news footage, Wallace fills in as many blanks in Bond's story as possible in this compelling documentary. Her professional life on stage, in the press, and on the screen is well-covered here, but little is known of Bond's origins or fate (the trail goes cold in Italy in 1976). However, Wallace highlights several fascinating aspects of Bond's life, such as her (so-so) 1964 ska single on Blue Beat; the episode where she hijacked Billy Graham's attempt to minister/preach to the sinful denizens of Soho, which garnered her worldwide press coverage; and the fact that she is/was a gorgeous, transgender woman (which, refreshingly, didn't seem to be that big of a scandal in the UK at the time--many of her strip club patrons and admirers had no complaints!).

Both The Beat's Dave Wakeling and Emerson observed that after The Beat girl began to be featured on gig posters and Beat merchandise, the band's previously male-dominated audiences were flooded with female Beat fans (and there were far fewer fights at shows). Many girls even began to copy The Beat girl's style of dress. So, a crucial part of Bond's legacy is that her image helped welcome/make space for girls and women in the 2 Tone scene. (Then, as now, representation matters.) Perhaps the most significant unanswered question in all of this is whether Bond is/was aware of her consequential and celebrated place in 2 Tone history.

On a related note, ska author Heather Augustyn provided research assistance for this documentary and she wrote a chapter on Brigitte Bond in her forthcoming book Rude Girls: Women in 2 Tone and One Step Beyond.
+ + + +
Posted by Steve from Moon at 5:53 PM

Many thanks for posting this -- really enjoyed it. Then again, I enjoy most labors of love and deep digs into the arcane, and this documentary certainly gets filed under each. Here’s hoping further bits of Brigitte’s story reveal themselves over time.