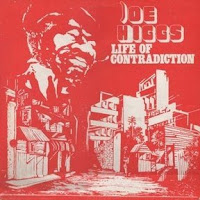 Originally recorded in 1972 for Island Records, Joe Higgs' Life of Contradiction languished in that label's vaults for three years, while Chris Blackwell tried to figure out how to market Higgs since, at the time, he was considered more of a Jamaican folk singer than a reggae artist (and, no doubt, Blackwell was also busy tending to the ascendant Bob Marley & the Wailers). When the rights reverted back to Higgs, the LP finally saw the light of day in 1975 on the Grounation label, and regardless of the sheer brilliance of the album, Life of Contradiction was very considered to be very much out of step with the reggae of that period--though it immediately strikes the modern listener as the early '70s roots reggae classic that it is. Indeed, several of the tracks had orginally been recorded during the ska era (such as "There's a Reward"); the influence of soul and R&B is powerful on several cuts (particulary on the title track and "Who Brought Down the Curtains"); and some of the arrangements, rhythms, and jazz-inflected performances were definitely atypical of reggae of that period.

Of note, Joe Higgs (who was already a hit recording artist with Roy Wilson in the duo Higgs and Wilson) was the vocal coach to The Wailers (Bob Marley, Peter Tosh, and Bunny Livingstone) in 1963 when they were just starting off--and he hooked them up with Coxsone Dodd, who produced their first single, "Simmer Down," which went to the top of the Jamaican charts in 1964 and set them on their long journey to eventual superstardom in the '70s. Like Bob Marley, Higgs has incredible command of his instrument (clearly he knew what he was doing when he taught The Wailers how to harmonize); his singing is wonderfully expressive and nakedly honest. Almost more importantly, he has an extraordinary gift for writing a catchy melody (my son, who tends to dislike reggae in favor of Green Day and the Beatles, was singing along to several of the songs as I played this record--which proves the adage that a good tune is a simply good tune, no matter the genre). All of the tracks on the LP are winners--no chaff here.

Nothing keeps Higgs down, despite the mess of life--the hardships of poverty, oppression, and heartbreak, you name it; his lyrics are doggedly hopeful: "Hard times don't bother me/life is so glorious/sticks and stones may brake my bones/faith and soul--can't cut it off" (from "Hard Times Don't Bother Me," one of my new favorite songs ever); "Everyday my heart is sore/seein' that I'm so poor/but I shall not give up so easily/no, no, no, cause there's a reward for me..." and "Sometimes I feel like a motherless child/you don't know, no one cares for me/I've never known sympathy/Sometimes I look to the world with a smile/can you hear what I say?" (from "There's a Reward"); to a wayward girlfriend/wife, he offers unconditional forgiveness: "Don't let me cross your mind/if I must stay behind/ but if you love me true/all you've got to do/is come on home" (from "Come on Home"). There is so much to enjoy and discover on Life of Contradiction, musically and lyrically. This rich, magnificent record is going to live with me for a long, long time. (A/A+)

(The LP contains the original album tracks; the CD adds two 1972 singles: "Let Us Do Something" and "Freedom Journey," both of which are availble as 7" singles from Pressure Sounds.)
Posted by Steve from Moon at 11:02 PM