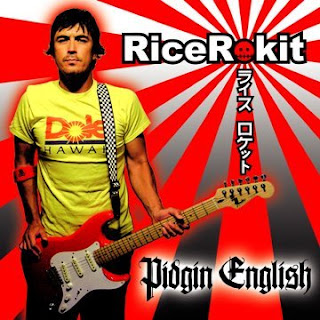 I received an e-mail from Kendo and TeamRokit a few days ago that passed along the news that Pidgin English, RiceRokit's follow-up to their outstanding Hang Loose CD, is slated to be released on Megalith Records in spring 2009.

Apparently Kendo's fanboy obsession with horror movies continues to find a healthy outlet in his music--he included a cut from Pidgin English to preview: RiceRokit's terrific cover of Bauhaus' classic goth track "Bela Lugosi's Dead" (definitely one song I never expected to receive a ska makeover). For anyone who isn't familiar with Bela Lugosi, he was an actor best known for his seminal portrayal of Dracula in the 1932 version of this film (a role he reprised for the equally great Abbot and Costello Meet Frankenstein in 1948) and for subsequent B horror films for Universal Pictures and others (Murders in the Rue Morgue, Island of Lost Souls, The Raven, Son of Frankenstein). Late in his life, he worked with bizarro filmmaker Ed Wood (Martin Landau portrayed Lugosi in Tim Burton's film of the same name), appearing in Glen or Glenda and the truly awful and almost unwatchable Plan 9 from Outer Space.

While I'm biding my time until Pidgin English sees the light of day, perhaps Megalith will release Hang Loose on vinyl? It deserves this kind of treatment. Jeremy? Buck?
Posted by Steve from Moon at 9:13 PM

Hmm liquidy vinyl....we have The Toasters "One More Bullet" coming out on LP very soon! with a cool ORANGE clear stylee...Maybe we could work up some special remixes or something for the RiceRokit LP. Or maybe even do an interim record, half of Hang Loose and half of Pidgin? What says yeh o' Kendo mighty one?

Vinyl is tasty goodness! Remixes are very cool! Sign me up for one of each (yes, I'll buy them!)...

I've almost worn Ricerokit's Hang Loose out on road trips... exceptionally fine traveling music. Their unique Ska-Hawaiian sound makes you grin and show your toofs. It's not all beat and bounce though... they have the kind of depth and soul that reveals itself after you've listened to it a few times.
Can't wait to buy Pidgin English. Maybe I'll buy it twice, stay home, and take an extended head trip instead. These guys are amazing!

Thanks for your comments. I couldn't agree more. And I particularly like how there is much more to this band than what's on the surface...