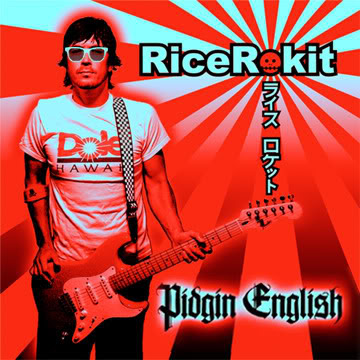 RiceRokit--one of The Duff Guide to Ska's fave bands--is in the process of putting the final touches on tracks for its sophomore album, Pidgin English (Megalith Records). Main man Kendo has been kind enough to send a few rough mixes our way--and we've been blown away by what we've heard so far.

While their brilliant debut album Hang Loose (DGTS grade: A) was full of originals, Pidgin English is mostly comprised of covers, reflecting Kendo's passion for both New Wave and 80s rawk. Bauhaus' "Bela Lugosi's Dead," a dubby, percussive track to begin with, is given a ska revamp, which feels so right and good that you wonder why a ska band hasn't done this before (and it's right in line with Kendo's horror movie obsession). RiceRokit's version of Echo & the Bunnymen's "Lips Like Sugar" is incredible in that it's a recognizable (and faithful and loving) cover of this song, but they completely own it--it's definitely a Kendo and the Bunnymen tune! Other covers include a great interpretation of Rufus Thomas' "Walking the Dog" (which both The Rolling Stones and Aerosmith included on their debut LPs), and Tom Petty and the Heartbreakers' "You Got Lucky."

Sadly, the one track that won't see an official release (since a certain major label wouldn't go for it) is a mash-up of Diamond David Lee Roth's vocals from Van Halen's "Runnin' with the Devil" and RiceRokit's ska instrumental version of the song. You can listen to it on RiceRokit's MySpace page--this version will embed itself in your cranium and refuse to leave (check out the cool "Fast Times at Ridgemont High" sample!). Simply awesome.

I'll be playing several of these new RiceRokit cuts at the N.Y. Beat: Hit and Run 25th Anniversary Reunion party on April 10th at the Dusk Lounge in NYC. I'm deejaying the event and will be set up in the very back of the bar...come by and say hi if you're planning to be there!
Posted by Steve from Moon at 2:40 PM

The fact that he likes the Bunnymen makes him even more awesome.

Ain't it the truth!