Some NYC Ska Shows in February and March To Check Out... 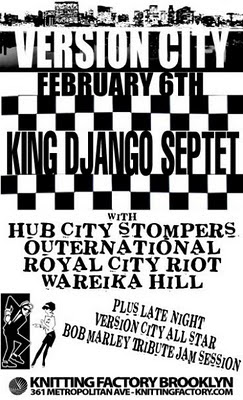 Here's a reminder to the NYC-area ska masses about a few upcoming gigs that y'all might want to consider attending (and there are doubtless more):

This Saturday, February 6 (on what would have been Bob Marley's 65th(!) birthday--and I suppose the ying to Marley's yang is that this date also would have been Ronnie Reagan's millionth birthday, had the conservative old coot lived to this day), Version City is in the house at The Knitting Factory Brooklyn...

The excellent Mexican ska band Inspector (which was featured on the 30 Years of Madness tribute compilation--they turn in a terrific ska cover of the pop hit "Our House") is touring parts of the USA in February (with dates in Phoenix, LA, Chicago, and more--mostly at Latin music-type clubs...go to their MySpace page for details), including a gig in NYC on February 21 at LQ (stands for Latin Quarter?). Anyone wanna check them out? Inspector have a great modern-ska sound (a couple of songs on their great self-titled album remind one distinctly of The Toasters)...

Here's another bill to keep on yer radar: on Saturday, March 6th, also at The Knitting Factory Brooklyn, Version City will be presenting...

I keep hearing rumors that sometime this February there will be a big NYC ska benefit for Haiti (apart from the one that The Hard Times just participated in at the Bowery Poetry Club)...anyone have the scoop?
Posted by Steve from Moon at 12:03 AM

I know Coolie is doing a benefit in April. I think it was supposed to be this month but got pushed back.

All i know so far as that Pilfers and Tsunami Rising are playing.

Thanks for the info, KJ!

KJ is correct. Coolie is leading the charge on this. More details as they become available.

How was the Bigger Thomas Haiti benefit in Sellersville?

The Version City Party was great. I dont think it could have possibly been any more fun. All the bands were great (I even dug parts of Outernational's set and I wasn't expecting to) and the Bob Marley jam at the end was a lot of fun.

Afterwards I went out with Django and some friends to Wo Hop in Chinatown to have a celebratory meal.

great music, great food...what more could i have asked for?

I caught most of Outernational's set--they put on a really good show (energy/showmanship) and have an interesting mix of Clash-style punk, a dash of ska/reggae, hard rock, and hardcore. And you have to love Dr. Blum and his harmonium...(I expected a small monkey to start working the crowd with a tin cup, maybe even pick a few pockets!).

Didn't catch much else that night, as I was there to meet up and talk business with a certain band (and had to cut out at around midnight, 'cause my son had a hockey game first thing in the AM).

Glad you had a blast, Mr. After-hours!

The harmonium was a great touch and he's a really talented musician. He's played trumpet in Django's band a few times. He's a great guy.

I liked the muttonchops, waistcoat, bowler, etc.--like he stepped out of Victorian England! And he's definitely a talented musician!