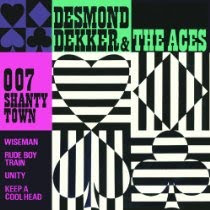 No matter what you think of the endless re-packaging and re-issuing of the incredibly deep Trojan catalogue, it is pretty cool to see them release these two classic albums, Desmond Dekker & the Aces' debut rocksteady album 007 Shanty Town (1967) and Dave and Ansel Collins' skinhead reggae special Double Barrel (1972), on CD--with the original cover art (sad they don't make 'em like this anymore) and original analog quarter-inch tapes used for their digital mastering. (Would it be too much to ask for a vinyl release of these albums, too?).

The only question is what took them so long to do it? 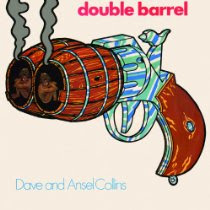 [As Duff Guide to Ska reader Jon has noted in the comments section, Double Barrel was previously released on CD with different artwork by RAS Records (in 1995) and Beatville (in 1998 as The Heavy, Heavy Monster Sound of Dave & Ansel Collins)]
Posted by Steve from Moon at 7:00 AM

Double Barrel has been released on CD at least twice previously. The first time by RAS in the early 90s and then later in the 90s by the RAS spinoff Beatville.

What I'm more excited about is the return of the low cost multidisc compilations, a continuation of the box set series. Ska-ing West, Heavy Heavy Monster Sound, Sounds & Pressure: Mod Reggae, and Foundation Dub. You can get them for $10 shipped from cdwow.us and each has 40 tracks, typically about half of which are new to CD (or so they claim, I haven't gone through them too closely to check on that claim).

Thanks for the fact checking (I should know better than to believe the Trojan hype--maybe their marketing materials should have stated that it is the first time Trojan has released these on CD?). I will correct this posting.

Funny thing is I forgot that I have the Beatville CD in my collection!

I appreciate you keeping me honest!