Gaz Mayall (The Trojans, Gaz's Rockin' Records, etc.) is celebrating a momentous milestone on July 3, 2010--the 30th anniversary (to the day!) of his Gaz's Rockin Blues, the longest running club night in London (which features ska, reggae, blues, world-beat, and roots-rock bands and music).

To mark this extraordinary occasion, Gaz and The Trojans are performing (see flyer below), plus Gaz is previewing his new book, "Gaz's Rockin' Blues--the First 30 Years" (Trolley Books), which collects all three decades of show flyers and posters, and includes photos and stories about all of the fantastic musicians he's met and worked with over the years (click here for a selection of gig flyers and pix--plus check out the preview article in Time Out London). 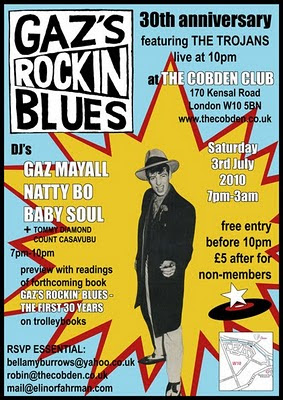 Gaz was raised on a musical diet of R&B and was dragged around every beat, pop & rock festival and venues throughout the sixties as a child, becoming a lifelong fan of reggae as a kid on the football terraces in the skinhead era circa 1968-72. He is also a great fan of boogie woogie, rock'n'roll, traditional Irish music, funk and world music.

The eldest son of blues legend John Mayall, Gaz began collecting records aged 17, bulk buying cheap reggae and ska collections down street markets such as Portbello road and brick lane at a time when it seemed no one wanted them. In late 1986 he formed his band The Trojans, and for the last nineteen years has been running his own record label Gaz's Rockin' Records, producing ska acts and artistes around the world.

While he may not be as well known over here in the States (although we tried to rectify this during my time at Moon--we released a great compilation from the band in 1996 titled Trojan Warriors: For Your Protection, The Best of The Trojans), Gaz really is a key figure on the UK ska scene, not only for The Trojans' Gaelic/blues/world-beat brand of ska and reggae and his superb ska label (that released music from Laurel Aitken & the Potato 5; and the Ska Stars of the 80s and Ska Stars of the 90s comps), but for being instrumental in championing ska in Britain during the post-2 Tone crash 'n' burn lean years--so much so that the scene was out-and-out flourishing by the second half of that decade (with bands like the Deltones, Hotknives, Loafers, Potato 5, Maroon Town, Forest Hillbillies, The Riffs, Bad Manners, etc.).

Gaz also has produced some incredible ska compilations for major labels in the US, UK, and Japan, most notably Skandal Ska for Mango Records (essentially, the companion album to the film Scandal); the Prince Buster retrospective, King of Ska for Quattro Records; Ska Island for Island Record's 40th anniversary celebration; and Top Ska for Trojan.

We know the 30th anniversary show/party will be a blast--and can't wait to get our hands on a copy of Gaz's book!

I got to meet Gaz in summer of 2000 or 2001. I came and checked out Gaz's Rockin' Blues he was cordial and even met me the next day and gave me a little tour around Notting Hill and we had some Mideastern food. I remember the last night I was there he he introduced me to Joe Strummer (R.I.P.) and Joe bought drinks and we talked about soul and Blues music. I wish Gaz Rockin' Blues a fantastic 30th. I remembered buying Gaz a pair of NYC socks (to add to his crazy sock collection) to thank him when I got back to NYC, then 9-11 happened and I never sent 'em. In any case He's a class act and think he's tops! Kudos!

Thanks for sharing your cool Gaz experience! And you got to meet Joe Strummer through him! I'm seriously jealous!