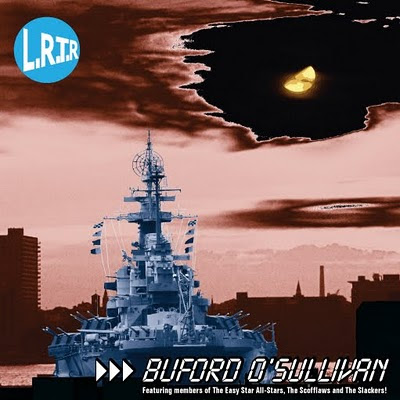 Listening to this collection of songs about downtrodden but determined characters and their offbeat lives on Buford O'Sullivan's remarkable new EP L.R.T.R. is the aural equivalent to catching a batch of lesser-known--but definitely classic--1950s film noir (the great instrumental track included here is titled "Johnny Medium," surely a character out of a hard-boiled detective movie?), cinema verite, and sci-fi movies on TCM (think of the innocent yet guilty-looking musician Henry Fonda charged with armed robbery in Hitchcock's "The Wrong Man"; the young boy who has been fooled into thinking he has killed his brother and has small adventures on the lamb in a slightly seedy Coney Island in "Little Fugitive"; and the giant atomic bomb test-mutated ants rampaging through New Mexico in "Them"). Like these films, Buford's songs evoke deep feelings of loneliness, desperation, loss, and regret--but also find reasons to be hopeful and happy amidst the pain.

With a Latin rhythm intro similar to The Drifters' "On Broadway" (or Ben E. King's "Stand By Me"), "How Right I Was" is a plaintive post-mortem of love gone sour, where the singer finally achieves mental clarity; enough time has passed and he has enough emotional space to realize what he instinctively knew all along: "She never wanted to go out me/or maybe I was just afraid to ask/But every single moment that came and went/brought another reason why I'd never see her again..." (check out the awesome horn lines on this cut--few can make the t-bone sound as sad, haunted, or bittersweet as Buford). "The Indefatigable" is a sprightly keyboard-centered ska tune imagining life as a ship and all of us serving as its crew: "It's a lifetime search for the Holy Grail/So just just knock it on back with a pint of ale/As winter gales fill the sails of The Indefatigable/You've run your boat onto the rocks/and razed the pubs by the docks/We've one request before your through/please take some dreams home with you." There are more than 8 million rodents (and roaches and now bedbugs) in the Naked City--and "The Army of Rats" is a slightly unsettling reminder that as we roam and stumble in the night searching for diversion, the rats are our constant companions from the city's underworld (perhaps waiting for us to falter).

The boogie-woogie swinging ska of "Woa Let Me Tell You" is the perfect musical context for the fantastical recounting of the genesis of Buford's musical career (his "lucky breaks," if you will), beginning with him bumping into John Lennon and William S. Burroughs on Houston Street, who send him off on the LIRR to Huntington, Long Island (home to The Scofflaws) to play with Bill Clinton and see Shelley Winters, Henry Fonda, Humphrey Bogart, Bob Barker, and the like in the crowd (it's kind of like the Bugs Bunny cartoon "Slick Hare," where, in a restaurant/club serving all of the Hollywood movie stars of the 1940s, a menacing, gangster-y Humphrey Bogart orders rabbit from Elmer Fudd, who then has to catch Bugs--who runs amuck--to avoid being plugged full of holes). The chugging, propulsive rhythm of the mid-tempo ska cut "L.R.T.R." (an acronym for "Love Rules the Road") is well-suited for the kooky, psychedelic road trip the singer experiences, walking down the highway trying to hitch a ride because he can't remember where he's parked his car; along the way he has a brief affair with a woman who flies away when it's over (an angel?); and finally catches a cab whose driver has a talking cat sitting on his head dispensing sung blessings: "May your love rule the road/and your footprint be strong." Weird, but it works. And it makes you wonder what exactly transpires when bands are on tour...

While Buford self-produced his first two solo albums (The Club of Hope and Fears in 1999 and The Sexy Eye in 2000) with good-to-great results, this time out he relies on his good friend and fellow ex-Scofflaw Victor Rice to provide the editorial control and top-notch studio production (check out Victor's killer version excursions on "Dub Rats" and "Indefatigable Dub") that ensures that L.R.T.R. is superb throughout (it doesn't hurt that the backing band that Buford has assembled is the cream of the NYC ska scene's crop: Agent Jay Nugent on guitar; Eddie Ocampo on drums; Ticklah on keyboards; Paul Gebhardt on sax; and Victor Rice on bass). Buford's singing has never sounded warmer, richer, and more confident--and his songs have never been better realized.

Duff Guide to Ska Grade: A
Posted by Steve from Moon at 12:01 PM