Duff Review: Prince Perry "Love at the End of the Century" 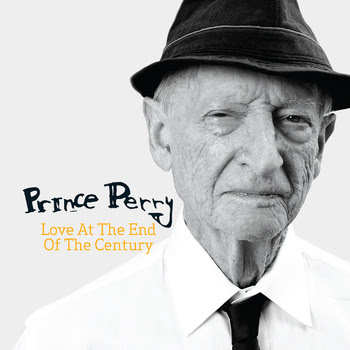 Recently, I mail-ordered Prince Perry's Love at the End of the Century on a whim, since I had only become vaguely aware of the band while I was doing research for an interview I did with Valerie Desnoyers and Lorraine Muller regarding the 2011 Montreal Ska Festival. When I noticed that the band covered The Police's "Walking on the Moon" (a song from my teen years that still holds particular significance, as I can vividly remember listening to the track over and over on my Walkman as I walked home late at night from parties and dates where inevitably I had failed to express my true feelings of love and lust), it stirred all sorts of new wave-era and lost youth nostalgia, so I figured I'd give Prince Perry a shot.

While Prince Perry's skittish, wound-up ska revamp of "Walking on the Moon" (which jettisons the original's giddy, starry-eyed goofiness--"I hope my legs don't break/walking on the moon...") is a great introduction to the band's amalgamation of skinhead reggae, 2 Tone ska, and modern rock, their brilliantly catchy and strikingly original tracks are a true revelation here. Perry Gladstone's and Mitch "King Kong" Girio's (ex-King Apparatus!) wonderful non-standard-issue ska songs are mostly concerned with attempts to make a love connection (emotional and otherwise), but they process life through an off-kilter filter with sharp, funny, and engaging results. Don't expect the typical yarns of love, lust, and loss about the boy/girl next door or man/woman in the next cubicle--but you will find a lot of unvarnished honesty and emotional depth that resonates.

The opening shot from the album, "Whatever You Can Get Away With," posits that since we're living in a vast, chaotic/amoral universe, our actions have little impact, meaning, or consequence ("Will the world keep turning/if we stay home that day?"). But even though we're insignificant on a cosmic scale (and no higher being may be judging us), we certainly have the great capacity to screw up our own lives and others' in small and devastating ways that we know are wrong ("Will my lips turn blue/when I go astray/Can I still come home/Will it be okay?").

One might assume that the title track, "Love at the End of the Century," is about romance being thwarted by end-of-millenium dread, but it's actually a jittery track about a much older man ("My mom's old man") with a still very active libido looking for sexual release any way he can: "A shave and a haircut for fifty cents/A can of tuna lasts all weekend/Pinching a penny 'till it bleeds/but a little action costs three fifties." Despite the the song's lyrical randiness, the loneliness (and guilt) of outliving your peers and the desperate, primal need to connect with other human beings before your own mortality overtakes you is achingly palpable (like I said, you won't find your stereotypical ska song fare here).

"Spinning Girl"--shades of Rumpelstiltskin!--has the singer enchanted by a Brothers Grimm fairy tale-type woman whose story is brought to life within the rotating grooves of an LP ("Songs about her fill the air/The rhythms softly soothe my ear/The deer come running from afar/and nest themselves among her arms/Spinning girl, oh let me see/the mirror here won't talk to me/Spinning girl, you came along/and now I know how much I long, I long"). Who hasn't fallen in love at some point with that mysteriously encoded vinyl, tape, or digital voice emanating from your speakers? (During my teen years, I'll cop to falling hard for Debbie Harry, Chrissie Hynde, Kate Pierson, Annabella Lwin, Patty Donahue, Terri Nunn, and Dale Bozzio...)

Despite all their efforts, the woman in "You Won't Say It" and our protagonist just can't seem to find the ability to communicate on the same wavelength: "I'm singing out of tune/and you say I've got the words all wrong/But I'm so in love with you/And you say it's all the same old song/Well, how can I tell the truth, if you won't say it?" Every time I hear it, I can't help but sing along with this cut's gorgeously catchy chorus-- plus "You Won't Say It" has one of the best, most evocative lyrics on the album: "I kiss your face/and you roll away/and howl at the moon." (His affectionate kiss turns her into a monstrous beast?!)

"Bee on the Bus" is a small moment (melo)drama as the singer checks out a "beauty" who boards the bus he's on and she ends up sitting on--and being stung by--a bee; she blurts out in the chorus (to the shock of the other passengers): "a bee bit my ass on the bus!" Both parties are aware that their relationship has almost run it's course in "Say You Won't," but the singer can't bear the pain of the split yet and begs for whatever scraps of dying tenderness he can get ("I can't take the sorrow/maybe next week/Well, things will be better/and I'll send you on your way/but please don't leave me today"). "Until It Don't Happen" is about mistaken and shifting perceptions of one's own identity and abilities. "Wire" is a Nick Lowe/Elvis Costello non-ska new wave/power-pop romp about burning bridges--literally cutting off all means of communication.

The final cut, "On it Goes," brings down the curtain on all the small vignettes depicted in all the preceding tracks, but acknowledges that the emotional turmoil, self-absorption, greed, and petty crap of stumbling through our messy lives is never-ending ("And all the time/we beg and whine/for all that things that seem to us to be sublime/And all the time/we seek to find/another way for people to believe we're divine"). But Prince Perry isn't bitter about it all--he's kind of resigned to the fact that it's just the way things are and will always be as long as there are people on the planet (the chorus may remind one of Billy Pilgrim's "So it goes" refrain from Kurt Vonnegut's "Slaughterhouse-Five").

Prince Perry's Love at the End of the Century is one of those albums that you'll find semi-permanently lodged in whatever device you use to listen to music--as well as your head. It's simply stellar--and one of the best and most unique ska records I've had the pleasure of randomly picking up in a long, long time.

What a comprehensive review. Thanks a lot, Steve. I will have it at hand the next time I listen to the Prince Perry album. I hadn't been listening a lot to his lyrics closely before. It seems I missed quite a lot.