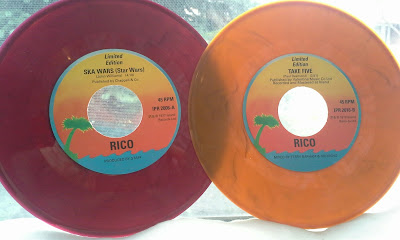 In the years following the release of his mind-blowing and critically acclaimed Man from Wareika (Island Records, 1976), right up to his involvement with The Specials and 2 Tone, Rico Rodriguez released a series of now fairly rare 12" singles (particularly in America) that included covers of John Williams' "Star Wars" theme (which, of course, was all the rage in 1977) and Paul Desmond's jazz classic (via the Dave Brubeck Quartet) "Take Five."

With this in mind, Rico fans--and "Star Wars" obsessives--should take note that Jump Up Records has a very limited number of a new single containing both "Star Wars" and "Take Five" on both red and orange vinyl (my order has already been placed)!
Posted by Steve from Moon at 3:39 PM

So... These are bootlegs, right? Universal has no promotion of this single, so I have to assume that these aren't legit.