Duff Review: J. Navarro and The Traitors "Criminals and Lions" 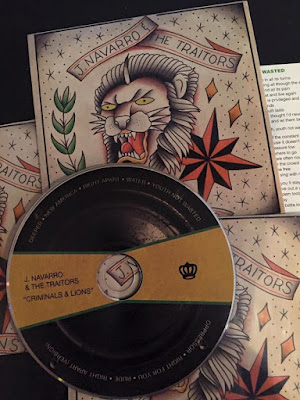 Detroiters Jay Navarro (of The Suicide Machines) and Eric Abbey (of 1592) are the masterminds behind J. Navarro and the Traitors, which has just unleashed a collection of powerful, pissed-off protest songs--delivered in a sharp modern ska/punky reggae style--on their fiercely excellent debut album, Criminals and Lions (mixed by Agent Jay of The Slackers/Crazy Baldhead). Things have been rough going in middle America since the Wall Street/housing meltdown/debacle of 2007, but the rot has been setting in ever since the supply-side/voodoo economics of the Reagan era. Detroit, AKA "Motor City,"--once America's fourth largest metropolis with the highest per-capita income in the US, when it was the auto manufacturing capital of the world and the unions were strong enough to ensure that the workers earned middle-class wages--has been hit particularly hard. In the first decade of this new millennium, Detroit's population decreased by 250,000 people (leaving great swaths of it abandoned); the city went bankrupt in 2013; and the 2014 census revealed that almost 40% of its residents live below the poverty line (making it the poorest big city in the USA). Living in the American-dream-gone-bust, post-apocalyptic shell of a city like Detroit has to significantly color your world view--so, it probably shouldn't come as a surprise that J. Navarro and the Traitors' response to all the suffering and devastation around them is to make rebel music. And, boy, do they do it well.

"Deeper" is a great, hard-driving ska track (that sounds like it could be from King Apparatus' debut album) encouraging the listener to find empathy for others and the capacity to see beyond the ridiculously superficial differences (read: skin color) that we use to divide/fear/hate ourselves:


"So, follow your heart and no one else
In this life, think for yourself
I have no time for your hate
what you give, not what you take
Man kills man most every day
Makes no sense, no sense to me
We're not black, we're not white
We're just human beings"

The furious ska/hardcore track "New America" offers a bitingly sarcastic critique (in the fine tradition of the Dead Kennedys or Fear) of what life in our country has devolved into (instead of what it could be):

"I hope the bank gives me a predatory loan
Along with school debt and they foreclose on my home
Give me war, give me family dysfunction
Give me freedom with rules and restriction
Capitalism, corporatocracy
All the grease the wheels of the war machine"

In a similar vein, "Right Apart" is a reggae lament about how we have the ability to address so many of our fellow human beings' problems, but greed and selfishness prevent the powers that be from actually doing something to resolve it all: "I see suffering everywhere/I see starvation/Looking for a better day/Hope a better day will come...The rich have it all/they don't want to share." (There's also a nice dubbed-out version of this track at the end of the album.)

"Water" refers to Detroit's 2014 water crisis (not the lead poisoning of Flint, MI's residents via their water system), which emerged after the city entered bankruptcy and was placed under the control of an emergency manager (appointed by Michigan's governor). In his search to find revenue for the city's coffers, the manager decided to go after Detroit's poorest black residents--again, about 40% of this city's population lives in poverty--who were behind on their water bills and turned off their water if they couldn't pay. This prompted the United Nations to issue this unusual rebuke: "Disconnection of water services because of failure to pay due to lack of means constitutes a violation of the human right to water and other international human rights." What was particularly galling was the it appeared that the Detroit Water and Sewerage Department wasn't pursing significant, overdue commercial and municipal water bills with as much zeal (and wasn't shutting off their water when payment wasn't forthcoming). After echoing the UN's declaration, "water is a human right--please don't stop the water," J. Navarro and the Traitors' terrifically upbeat track (very appropriately) segues into a spirited ska cover of Toots and Maytals' "Pressure Drop" that simultaneously recognizes and sympathizes with the plight of Detroit's residents, while calling out the powers that be for their inhumane actions:

The fantastic, buoyant ska cut "Oppressor"--it might be my favorite songs on the album--uses a quote by the (now retired) Anglican South African Archbishop Desmond Tutu (a celebrated anti-apartheid, peace and social justice activist) as something of a mantra to encourage people to take action if they see injustice around them, since doing nothing is itself a form of complicity:

"Youth Not Wasted" and the incredibly catchy "Rude" are songs of inspiration for the young (we only go around once, so learn from others' life experience while you can!). The former essentially advises kids to not be in an anxious rush to become adults, but to fully enjoy where they're at ("Not knowing shit or where to go/The best times in life are often now/So, sing along and join the crowd/The only way to ever be free/Is to dance along and sing with me"), while the latter posits that the best way to live your life is to be "rude"--to stubbornly be yourself and not be knocked off/lured away from your own path.

The track that perhaps best sums up J. Navarro and The Traitors' reason for being (and serves as their mission statement) is "Write for You":

"Listen up
The hardest thing in this world
is to find yourself and just be you
The lion never fears the jackal
in Babylon, yeah I'm true
I'll never stop bringing all the noise
of a protest song
It's a revolution of the mind
20 year's lion strong
Because these words and these songs
are all I've ever had
Revolution songs, these songs of freedom
These songs of defiance
Criminals and Lions"

I hope J. Navarro and The Traitors' fantastic songs of truth and righteousness find their way to many receptive ears and heads (the messages are delivered inside some terrific tunes!). These days--and I suspect even more so in the future--we need an army of lions to set things right.