Duff Review: "Outside The Lines: Lost Photographs of Punk and New Wave's Most Iconic Albums" 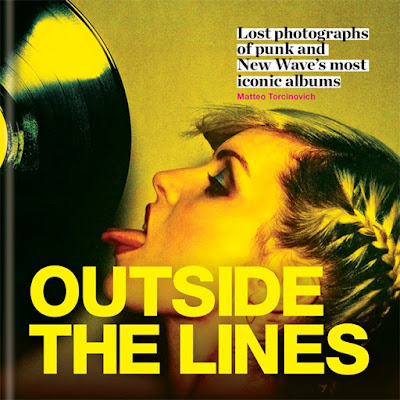 The subtitle of this beautiful collection of photographs is a bit of a misnomer, as the previously unpublished shots presented here are from the same photo sessions that produced many of the iconic punk and new wave album covers that we've come to know and love and were mostly just long forgotten in the photographers' archives. Rather, these are the contenders that, for whatever editorial and aesthetic choices were made at the time, didn't make the cut (maybe it would have been more punk rock to call these series of pictures the "rejected photos..."). Either way, it's a fascinating, "backstage" look at what might have been, had any of these alternative shots been used on these classic punk and new wave LPs.

A few years ago, Italian graphic designer and punk/new wave afficionado Matteo Torcinovich was looking at the LP cover for the Damned's debut album and wondered if there were other, associated shots from that session. So, he contacted the photographer Peter Gravelle and, to Torcinovich's surprise, they began a long correspondence, which resulted in Torcinovich getting his hands on the unused Damned album cover pictures, which fueled his desire to track down many more of these discarded cover shots. After combing through his own record collection, selecting 150 of his favorite punk and new wave records from 1976 to 1982, Torcinovich reached out to all of the photographers involved and the results (if the photographers were alive, cooperative, and hadn't lost the negatives to time) from 46 cover photo sessions (for bands like the Ramones, Ian Dury, Ultravox, Blondie, Elvis Costello, David Bowie, Lene Lovich, The B-52's, The Cure, PiL, John Foxx, Echo and The Bunnymen, Suicide, Bauhaus, and more) are presented in "Outside the Lines."

Ska fans and long-time readers of this blog, in particular, will want to take a look at Chalkie Davies' alternate shots for The Specials' debut record, one of which (the blue tinted shot) is pretty fantastic.

There are several essays that provide pop-cultural context for this musical era (the best is probably the one by Glenn O'Brien, known for his columns in "Interview," "Art Forum," "Spin"--and in one of Torcinovich's two essays, the biggest revelation is that he discovered who took the cover shot of Iggy Pop's The Idiot--it was always assumed to be Andy Kent, who took the Lust for Life photo--but was, in fact, a one-off, black and white Polaroid taken by Iggy's friend and collaborator David Bowie!), as well as short introductions to each series of photos related to these album covers. Some of the intros contain fascinating and insightful quotes from the photographers about their work (such as Martyn Goddard's recollections about shooting The Jam's In the City cover and Jim Rakete's on the Nina Hagen Band cover), but all too often you're left craving more details and factoids. Having said that, the images and contact sheets presented here are generally nothing less than stunning and will be eagerly sought out by new wave and post-punk fans (if you have "This Ain't No Disco: New Wave Album Covers" on your shelf, this book is for you!).