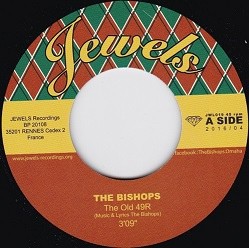 The Bishops "The Ol' 49R" b/w "The Black and Tan" (7" single, Jewels Records, 2016; available in the US through Jump Up Records): Hailing from Omaha, Nebraska (a city forever imprinted on my brain from the opening of "Mutual of Omaha's Wild Kingdom" TV show from the 1970s), The Bishops keep the heart of ska, rocksteady, and reggae beating mighty strong in mid-America (so much so, that last year they backed Mr. Symarip--Monty "Neysmith" Montgomery--on his "Jump" b/w "Laurels for Laurel" single and for his Jamaican Oldies gigs in Chicago). "The Ol' 49R" (named after the gold miners of the 1849 California Gold Rush or a type of golden ale) is a fantastically funky and sprightly skinhead reggay instrumental track, while the more modern/3rd wave ska track is a wonderful ode to the marriage of pale ale and stout ("what is created/is pure harmony"). Saddle up to the bar for this one! 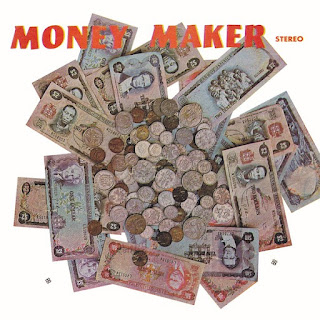 Various Artists: Money Maker (LP, CD, digital download, Studio One/Yep Rock, 2016): Billed as one of the rarest Studio One releases, Money Maker has been lovingly remastered from the original tapes and reissued by Yep Rock under the auspices of Coxsone Dodd's daughter Carol Dodd. This mostly instrumental 1970 compilation (heavy on American soul and jazz influences) features Jackie Mittoo, Ernest Ranglin, Cedric "Im" Brooks, and David Madden playing over both popular and obscure Studio One riddims recorded for Dodd by Soul Dimension, The Soul Brothers, and The Soul Vendors. Cuts more than worth the price of admission include Im and David's "Money Maker" over the Heptones' "Fattie Fattie" riddim; Lloyd Williams' black pride-promoting "Black Man Train," a fantastic vocal cut over The Wailing Souls' "Back Out With It" riddim--Ranglin does some amazing guitar work here; Coxsone Dodd--AKA The Boss (!)--takes the mic on what may be the highlight of the the album, "The Great Gu Ga Mu Ga" (I can't find any info on whether this was ever versioned; it certainly should have been!); Jackie Mittoo's hot keyboard gets a funk workout in "Mixing"; and Im and David's wonderfully confident and majestic "Soul Walk," which became the riddim track for Burning Spear's "Pick Up the Pieces." As always, it blows the mind at the volume of fantastic music that flowed out of Studio One...