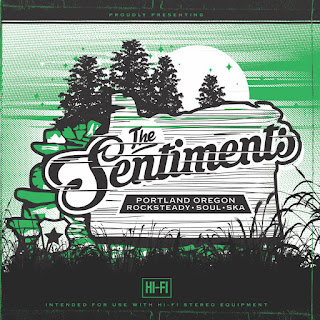 The Sentiments Hi-Fi (digital album/CD, Simmerdown Productions/Bandcamp, 2016): This Portlandian ska supergroup of sorts (comprised of members of Easy Big Fella, Francesca, Engine 54, Crucial DBC, and Cornerstone) released their all out fantastic debut album just prior to the Christmas holidays. So, of course, it got lost in my end-of-year mad blur and I'm just now becoming clued in to what I've been missing (which is a lot)! The Sentiments play a sweet and pleasing blend of ska, soul, rocksteady, and reggae (paging all fans of The Pietasters!) Indeed, with lead singer Erin Wallace's wonderfully soulful alto voice, one could imagine that The Sentiments came into being when she took a wrong turn backstage and ended up on stage being backed by a ska band, rather than a soul one...

The Sentiments' Hi-Fi is an album stacked up with great songs (that seem so cinematic--some appropriate for films noir, others in the classic "let's put on a show" type musical vein, if the American song book had been written in ska 'n' soul) full of genuine emotion (the highs and lows of love) and razor sharp performances (by Mike Anderly on trombone, Sir Ryan William Bley on bass, Newel Briggs on guitar, Mike Birenbaum on piano, organ, and vocals, Tadd Enright on tenor sax and guitar, Matt Griffin on drums, Paul Howard on barit sax, Christian Lyons on trumpet, and Erin Wallace on vocals). The defiantly jaunty ska/soul of "Moving On" is all about being way past the pain of a break-up and eager for freedom again ("So, take all the time that you need/To try and get yourself straight/I'm out the door before/Before it gets too late"). Even the fast rhythm of the song sounds like the thump, thump, thump of the highway joints under the tires as you head out of town. If you're a citizen of a certain political persuasion during these dark, nonsensical times, the Doreen Shaffer with The Skatalites-like "This House" offers shelter, relief, and the chance to recharge your batteries of resistance (maybe an alternate reading could be that it's neutral ground, a place where we can all come together and figure out our way back to common ground?): "This house will be filled with love/This house can be an escape/This house will be filled with love/So come in/Sit down, and know it's okay...'Cause outside there's so much trouble/And outside there's heartache and pain/And inside there'll be no more struggle/'Cause inside this house we all share the same name..."

"You Don't Know" is a raucous showstopper--a fantastic duet between Wallace and keyboardist Mike (Mikey Sha Sha of Easy Big Fella) Birenbaum--about how hard each of them has it in life, but also that they need to get dressed up, go out and lose this stress with some fun. You'll swear "Why Did I Stay" was a Motown-era hit, but it's a heartbreaking original full of regret about two people who brought out the worst in each other ("You make me a liar/I make you a thief"). "Go On"--a ska pop hit if I've ever heard one--gives him enough rope to hang himself ("Go on/And tell me how you'll find another/Go on/And tell me I'm not your favorite lover/Go on/And tell me how we were only meant to be friends/Go on/Let me tell you how it ends..."). Nice little Bob Marley nod in there, too. The swing ska of "Every Time" is another terrific duet between Wallace and Birenbaum with a very Toasters-like horn line. The last two tracks have a decidedly '70s bent to them--"I Don't Want to Fight" has a bit of country and Latino pop in there, while The Sentiments' cover of Ashford and Simpson's 1968 song for Marvin Gaye and Tammi Terrell "You're All I Need to Get By" is an amazingly inspired choice.