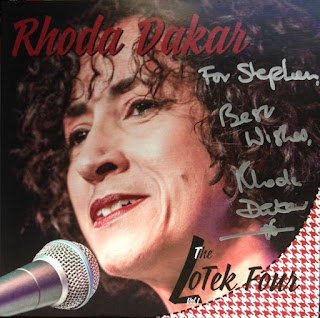 Rhoda Dakar The Lotek Four, Volume 1 (7" vinyl EP/CD EP, Pledge Music, 2016; available through Dakar's online shop): The latest release from Rhoda Dakar was inspired by a performance she gave with son Frenchie at his school of a version of Greenwich Village folk-rocker Fred Neil's 1967 anti-war/pro-environment/love song "Dolphins," with Frenchie on drums, his music teacher on piano, and Rhoda, of course, on vocals. (Apparently, Frenchie's first visit to a recording studio was with his mum when he was six months old, when Beth Orton and soul/jazz singer Terry Callier were recording "Dolphins" with Dr. Robert--of Blow Monkeys fame--producing; Dakar had appeared on several of Dr. Robert's solo albums in the '90s, around the same time Orton recorded "Dolphins" for her Best Bit EP.) That unadulterated joy of performing music for music's sake and pleasure of sharing both beloved old tracks, as well as amazing new ones, really comes through on The Lotek Four, Volume 1.

Fans expecting more tunes in the 2 Tone/Bodysnatchers mold should re-set their expectations (it has been decades since those heady days, right?). The EP is split between traditional ska/rocksteady tunes an side A (if you're using vinyl) and lush, moody, introspective '60s jazz on B (no doubt, due to the influence of her father, UK jazz musician André Dakar). All are stellar and performed expertly by Dakar and her wonderful collaborators: Louis Vause (piano) and Paul Tadman (bass) of Crunch aka the Nutty Boys and the Lee Thompson Ska Orchestra; Lenny Bignell (guitar) of Pama International and The Sidewalk Doctors; Mark Claydon (drums) from The Get Up--Frenchie sits behind the kit for "Dolphins," natch; and Terry Edwards (sax, flugel horn) of The Higsons and Madness.

The EP opens with the gorgeous, but bittersweet ska track "Fill the Emptiness (Lovers)" (if you buy the CD version, contains an equally stunning jazz version, "Fill the Emptiness (Reefa)"), written by Dakar, Vause, and Tadman about being emotionally rescued, but at great cost: "Kind words only leave your lips/And then you wrap me 'round your finger/You, darling, you/Fill the emptiness/Deep down inside." The group then covers Madness' "Tears You Can't Hide"--a real gem written by Cathal Smyth from their 1985 Mad Not Mad album that has a '60s Motown feel to it--smoothing out the original's odd reggae rhythm and giving it a rocksteady sheen ("Carry the world on your back/Heavy weights tearing you apart/Feel in a rage, can't speak up for yourself/All you're trying to do, it's no good anyway/Now I see tears you can't hide").

The lonely and detached nightclub narrator of "You Talking To Me?" (written by Dakar, Vause, and Tadman and sung in both English and French), whose credo is "an observer of souls," goes through the motions, but still hopes against all expectations to find real love: "The vicissitudes of urban life/Leave me cold, exhausted, tired of strife/The connect that makes it all worthwhile/Often absent, though I try to smile/The rough, the smooth, the twists, the turns/Oh the lessons we are here to learn/An epiphany, a flash of light/On occasions when we get it right." Before this recording, I wasn't familiar with Neil's (or Orton's cover of) "Dolphins," but am so glad that I am now. It's an extraordinary song of longing and sadness for what could be ("And sometimes I wonder/Do you ever think of me?") and Dakar's jazz version is beautifully haunting.

In sum, The Lotek Four, Volume 1 is a phenomenally good release, not to be missed. Here's hoping that the next batch from this lot comes very soon.