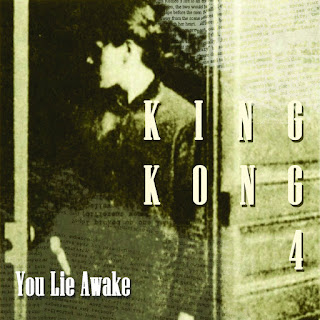 King Kong 4 You Lie Awake (digital single, self-released/Bandcamp, 2017): If you mention that Mitch "King Kong" Girio was a key member of early '90s Canadian ska act King Apparatus (which, of course, featured Chris Murray), most ska fans would know the reference, but some might not be aware that he's been the go-to songwriter and producer for a slew of mostly Canadian bands including The Planet Smashers, The Kingpins, One Night Band, Prince Perry, and more. His most recent work has been in service of Susan Cadogan (check out our review of her incredible Take Me Back EP; Girio co-wrote all the tunes, as well as performed, recorded, and produced them), but now he's just released a great digital single for his own Toronto-based group, King Kong 4 (which includes Brendan Bauer on bass, Andrew McMullen on drums, Ronald Poon on Hammond organ, King Kong Girio on vocals and guitar).

King Kong 4's sound is a cross between the late '70s New Wave angry young man songwriters Elvis Costello and Joe Jackson (both of whom recorded ska/reggae tracks early on in their careers) and the 2 Tone of The Specials, but this kind of sells Girio's songwriting short--he's got his own thing going and can compose hooks like mad. "Breaking My Heart" is about love from a distance--the singer with a crush on a girl in the audience who he can't quite compel to dance to his band's music, which would be kind of like them being together (but she's with her "dead weight of a boyfriend"): "So get your ass onto the floor, girl/You better shake those hips/So what you think we play this shit for?/Can’t you read my lips?/It’s time to make a move, so act now/You can do the Twist /Just a little bit of dancing/Then you can’t be wrong /Just a little bit of dancing/Dancing all night long." "Annabelle" might be about a girl losing herself on an LSD trip ("Your world has come undone/Quickly dissolving on your tongue") or to growing paranoia/mental illness ("With no one to absolve you/Because the problem still revolves around the fear/That’s floating in the atmosphere/That’s coming oh so near"). Whatever the issue is, she's worried about being forgotten: "When half the world is slumbering/You lie awake half-wondering/Who will leave something here for Annabelle?" Both songs have an undercurrent of longing and melancholy, but the music is wonderfully catchy and upbeat.

Don't let this terrific release from King Kong 4 pass you by!