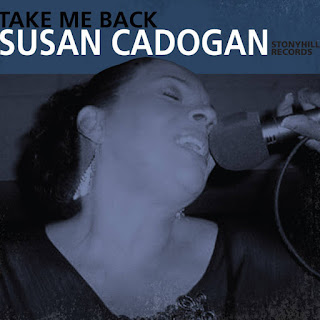 Susan Cadogan Take Me Back (digital EP and CD, Stonyhill Records, 2016): While she is best known for her Lee "Scratch" Perry-produced 1975 hit "Hurt So Good" (#4 on the UK charts) and her classic self-titled 1976 album of "romantic reggae" for Trojan (which was also produced by Perry and is being re-issued on heavyweight vinyl in late October in celebration of Scratch's 80th birthday this year), reggae singer Susan Cadogan has been fairly active in the 2000s (for example, see her recent single with Ken Boothe on Jump Up) and her voice is still in absolutely gorgeous shape. Having said that, it was still a wonderful surprise to find that she's released an EP's worth of really fantastic new tracks on her Stonyhill Records label--all co-written by Mitch "King Kong" Girio of King Apparatus and Prince Perry fame, who also performed on, recorded, and produced these tracks. (It's very much worth mentioning that Take Me Back was recorded in Jamaica, Canada, and Germany by an all star team including “Lucky” Pete Lambert of The Trojans on drums, Jammal Tarkington and Rodney Teague of Keyser Soze on horns, Ryan Chopik of The Harmonauts on organ, Meher Steinberg of Prince Perry/King Apparatus on keys, and Girio on guitars and bass--they've done Cadogan proud.)

As might be expected, Take Me Back is full of damaged love songs--all exploring the Venn diagram of ecstasy and agony delineated in "Hurt So Good." The EP opens with a sultry and ethereal version of One Night Band's "Crazy" (co-written with Girio and Lorraine Muller of The Kingpins, Fabulous Lolo, etc.), which is a stellar rocksteady track about taking stock of a relationship after it's done and one's head is clear: "I must have been crazy to beg you to stay/Crazy enough to take you in anyway... Standing by the open door/Waiting for you to hurt me once more." Things shift quickly to the irrepressibly optimistic "Take Me Back"--see if you can resist singing along with the backup singers during the chorus--a song full of eager anticipation for the good things that could come if all is forgiven. "I Don't Want to Play Around" sounds like it could be a recently unearthed 2 Tone single (that would have hit it big!). Cadogan's heartbreaking performance on the dark "Leaving" is simply devastating ("The hardest part of leaving you/Is knowing that you'll move on, too/Holding somebody's hand/Instead of mine"). And even though the subject matter is kind of bleak ("The neighbors still talk/My best friends ask/It's the worst it could be/But when you left this home/You also took the best from me"), the EP ends with "The Best of Me," a sprightly and crazy catchy early/skinhead reggae cut.

I am in no way exaggerating when I state that this is one of the best ska/rocksteady releases I've heard this year.