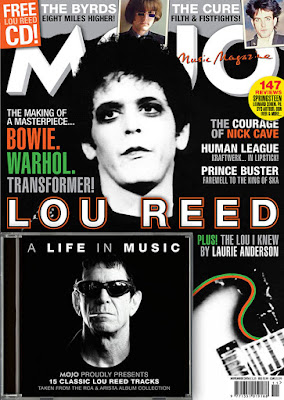 The November 2016 issue of MOJO Magazine contains an excellent piece by reggae author/expert David Katz honoring Prince Buster's extraordinary career, his many musical achievements, and his impact on music worldwide. One of the interesting things I learned from the article was how Prince Buster and The Trojans' Gaz Mayall became fast friends and collaborators (they met when Prince Buster appeared with The Skatalites at the Reggae Sunsplash Festival at Crystal Palace FC's Selhurst Park in London in 1984, where Gaz convinced him to start performing regularly again; in fact, a few years later, Buster recorded the "Stack-O-Lee" single with The Trojans for Gaz's label and Gaz put together King of Ska in 1992, quite possibly the best Prince Buster compilation ever released).

Also within these pages are stellar reviews of The Frightnrs' Nothing More to Say ("...it's one of the most thrilling rocksteady albums to have been made since the genre emerged in the late '60s..."), Max Romeo's Horror Zone (which I reviewed for The Duff Guide to Ska in August), and the book "Walls Come Tumbling Down: The Music and Politics of Rock Against Racism, 2 Tone and Red Wedge 1976-1992" (which I'm planning to review once I've finished reading John Savage's lengthy tome "1966: The Year the Decade Exploded").
Posted by Steve from Moon at 12:30 AM