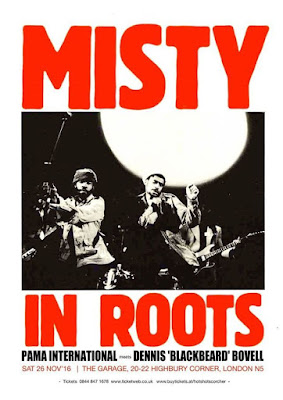 Pama International recently launched a new PledgeMusic campaign for the vinyl versions of their upcoming Love and Austerity album, which are slated to be sent out in February 2017 (the album also will be released on CD/digital by Cherry Red/Happy People in January 2017). As always with this type of fan crowdfunding, there are signed copies of the album available, as well as a very limited edition boxset (only 100 will be made) of the album's tracks released as a series of eight 7" singles. My pledge made today for the Love and Austerity LP just put them at exactly 50% of their project goal! (The campaign has 79 days left, but act now!)

Sadly, I won't be able to take advantage of a special offer currently extended to Pama pledgers this week--a free ticket to experience Pama International support Misty In Roots on November 26, 2016 at The Garage in London (dub legend Dennis "Blackbeard" Bovell will be mixing Pama live that night)! Now, if only I could score some free airline tix to the UK...

The digital version of the band's first single off the album, their reggae cover of Martha and Vandella's "Heatwave," will be available from iTunes and other digital retailers tomorrow, Friday, October 14 (and you can pre-order a "Heatwave" 7" through the PledgeMusic campaign now).