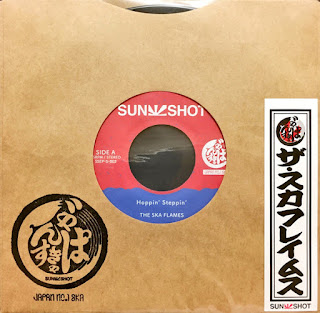 The Ska Flames "Hoppin' Steppin'" b/w "Someday" and "El Camino" b/w "Hometown Waltz" (vinyl singles, Sun Shot Records, 2016; available in the USA through Jump Up Records): The Ska Flames first came to the attention of trad/vintage ska fans outside of Japan courtesy of Gaz Mayall, who produced and released their now classic debut LP Ska Fever on his label in 1989 (it was recorded during the Ska Flames' first visit to the UK in 1988, when they performed at the Notting Hill Festival and Gaz's Rockin' Blues). While the band seemed to go dormant after a string of excellent releases in the first half of the 1990s (ending with 1995's Damn Good, which featured the "Godfather of Ska" Laurel Aitken, and Skatalites Roland Alphonso and Lester Sterling), they've been at it again in the 2000s and have just issued a new album Turn-up on their own Sun Shot label. Jump Up's Chuck Wren--a huge fan of the band--managed to obtain hard-to-come-by copies of these two singles off the album to offer to followers in the US (Chuck, can you import the Turn-up LP, too?). "Hoppin' Steppin'" is a bright, swinging Skatalites-styled ska instrumental designed to pack the dance floor, while "Someday" is melancholy rocksteady tune full of longing that sounds like it was taken from the American Pop Standard songbook, circa 1962. The rollicking instrumental "El Camino" is pure Latin ska (think of Jump With Joey's "El Diablo Ska"), but things shift gears for "Hometown Waltz" (sung in Japanese), which is solely for the purpose of slow dances or sobbing into your pint of beer. Get 'em before they're gone!