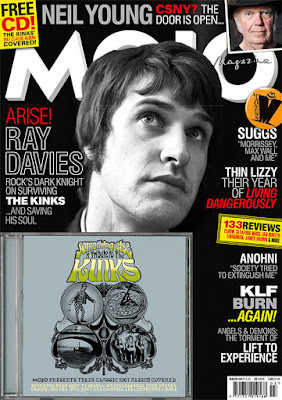 There's a fantastic four-page interview with Madness' Suggs by Ian Harrison in the March 2017 issue of MOJO Magazine with The Kinks' Ray Davies on the cover. The occasion is to help promote Madness' excellent 11th album, Can't Touch Us Now (which The Duff Guide to Ska has reviewed, if you didn't know), but the interview is quite wide-ranging, covering much of the band's--and Suggs'--career.

Here are some choice bits:

Ian Harrison: "Presently, there was Britpop, an arguably Madness-indebted notion."

Suggs: "I was a bit sort of jealous to be honest. 'Cos I remember being around in Camden Town and seeing Oasis and Blur and Menswear and fucking whoever, and thinking, 'Why aren't we in this frame?' Obviously forgetting that we weren't 19 anymore. But I remember Ian Dury being a bit malevolent about us, that we were nicking his shtick. What you should be is flattered."

Suggs: "With Morrissey, Clive [Langer] was producing him, and he wanted someone to be a bit Cockney and talk about Piccadilly. I think he wanted to meet me and Cathal [Smyth, Madness co-vocalist], especially. So we went up to sing some backing tracks and had a very bizarre weekend at this residential studio. Someone said, 'Oh Morrissey wants to have a word,' so I knock on the door and there's this tap-tap-tap. I open the door and he's walking round with sunglasses and a blind stick. Did he explain himself? Of course not. Never dull with Morrissey!"

Ian Harrison: "But you are, in the lineage of The Kinks, the Small Faces and Ian Dury, avatars of British pop exceptionalism..."

Suggs: "Yeah--'quintessentially.' I don't mind that we sound like we're from London. I like how the Buena Vista Social Club sound like they come form Havana or Bob Marley sounds like he's from Jamaica. I think the fact that it wasn't intelligentsia-ised resonates with the general public, too--you were either jumping up and down and getting into it or you weren't. I was thinking of the under-cultures--the skinheads, the Mods, and the suedeheads, the Northern soul thing... even John Peel said he'd never heard reggae before the mid-'70s; he just thought it was for yobbos having punch-ups in discos. I felt part of that firmament. It might have had huge social importance, but that wasn't the point."

In this issue, there's also a great review by David Katz of the reissue of Keith Hudson's Pick A Dub.

There was an in depth interview with Suggs in Classic Pop magazine #25, which is also worth investigating. He was the main cover feature on the UK edition but may not have been for overseas releases -

Thanks for the tip, James! I'll keep an eye out for this one!