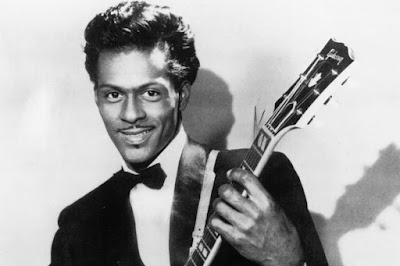 Upon hearing the news that the King of Rock 'n' Roll Chuck Berry had passed away, I almost immediately thought of The Toasters' tribute to him on their 1996 album, Hard Band for Dead. "Chuck Berry" was a fantastic tribute to this extraordinary musician and an acknowledgement of his great influence on the development of ska (the music is a cool mash-up of jump blues, '50s Berry rock, and early 1960s JA ska), in addition to being another of Bucket's ska history tracks (see "Ska Killers" or the Duke Vin homage "Shebeen"). A read through of the lyrics is definitely worthwhile (I particularly love the nod to Laurel Aitken and how his move to the UK to influence the ska scene there is depicted):

Now the 90's are here with the new bands bringin' it to you
Skins and rudies--and even some punk rock, too!
But the boys are still playing and the music is coming out live!
Down at your jukebox, dancing on a Saturday night!

In their eyes where does Chuck Berry fit?
Well he influences the Ska, that's the long and the short of it
He played his guitar and they heard it on the radio
And the rest is history, just as everybody knows

In fact, this track was issued by Moon Records as a clear vinyl single in advance of the Hard Band for Dead album as part of its limited edition singles series and the song was actually slated to be The Toasters'/Moon Records' first music video. I had already started shooting Super-8 footage for the "Chuck Berry" video when Bucket rang me up to let me know that he had another track that the band had just recorded that might be even better to do--that, of course, was "2-Tone Army." (It's a bit blurry, but the 45 that you see playing on the old dansette at the beginning and end of the "2-Tone Army" video is the "Chuck Berry" b/w "Maxwell Smart" single.)

This king is dead--long live the king! Rest in peace, Mr. Berry.