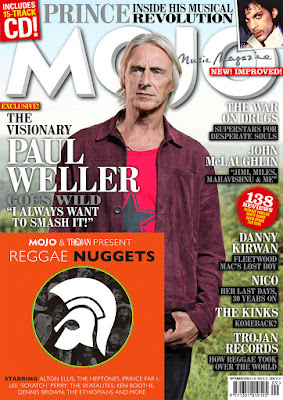 Apologies for no new posts over the past two weeks--I was on holiday with the family. On our last day in Dublin, I picked up a copy of the September 2018 issue of MOJO at Tower Records (!) for the airplane ride back to the USA. In it is a great feature on the rise and fall and rebirth of Trojan Records (in recognition of their 50th anniversary) by reggae journalist Dave Katz that provides more info on co-owner Lee Gopthal than I've previously encountered. Plus, the giveaway CD Reggae Nuggets sports both classic and lesser-known Trojan tracks by Alton Ellis, The Heptones, Prince Far I, Ricky and Bunny, Dennis Brown, Phyllis Dillon, Johnny Osbourne, The Ethiopians, The Inspirations, The Beltones, Val Bennett, Ken Boothe, Lee Perry, The Crystalites, and Lester Sterling and The Skatalites (MOJO also has a list of what they consider to be the 50 greatest reggae albums up on their website--discuss amongst yourselves). Also on my reading list for the journey home was Margo Jefferson's fascinating cultural history of Michael Jackson, On Michael Jackson--check out the Guardian's interview with her; and Mark Andersen and Ralph Heibutzki's incredible We Are The Clash, the now-definitive history of the post-Mick Jones/Topper Headon Clash (Joe Strummer, Paul Simonon, Nick Sheppard, Vince White, and Pete Howard), which managed to achieve some legitimate triumphs--many blisteringly good live shows, like their 12/6/84 benefit show for striking union coal miners at the Brixton Academy (with a number a great new tracks in the set like "Are You Ready for War?," "Three Card Trick," "North and South," "Dirty Punk," "Jericho," and "This Is England") and their daft-but-brilliant, have-guitar-will-travel busking tour of the north of England--despite Strummer's struggle with depression/self-medication and Bernard Rhodes' absolutely ham-fisted hijacking of what could have been a pretty great album of new songs: Out of Control.

On our travels around Ireland, I managed to miss the chance to see Madness perform twice. They played Galway a day before we arrived and were in Dublin while we were in Galway! (I did catch a BT advert that uses their cover of "It Must Be Love" on TV a few times, but it's not the same.) And Jerry Dammers did a DJ set in Dublin while we were on a brief detour to the (brutally hot) continent. So it goes...