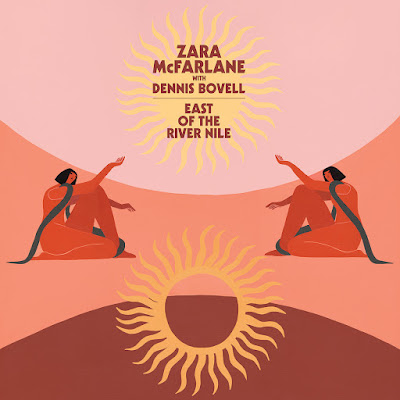 While reggae/dub musician and producer extraordinaire Dennis Bovell's profile may not be as high as it was in the '70s and '80s when he was working with artists like Linton Kwesi Johnson, Matumbi, Rico, The Slits, Madness, The Pop Group, Janet Kay, Orange Juice, his own productions (as Blackbeard or under his given name), and countless others, he's been steadily performing and producing in the many years since (Boy George, Viv Albertine, Joss Stone, Alpha Blondy, and more), consistently releasing amazing productions for the enjoyment of those in the know who haven't lost his thread (read a few of our recent reviews here, here, here, here, and here). This new collaboration with British-Jamaican singer Zara McFarlane, who's known for blending and being incredibly proficient in both the reggae and jazz genres (check out her soul-jazz and reggae versions of Nora Dean's "Peace Begins Within"), is a brilliant take on Augustus Pablo's classic instrumental "East of the River Nile."

On this EP, which consists of two versions of the vocal cut with two dubs (the alternate dub is wonderfully percussion-driven), McFarlane sings vocalise (nonsensical vowel sounds) and improvises on Pablo's melodica line, while her ace band (Nathaniel Cross on trombone and arrangements, Moses Boyd on drums, Jay Darwish on bass, Ashley Henry on keys, Junior Alli-Balogun on percussion, and Binker Golding on tenor sax) captures the "Far East" roots reggae sound and tension of the original exceedingly well. Bovell mixed all the tracks and created the shimmering and mesmerizing dubs--expansive aural landscapes full of heat and mirages. All in all, it's an impressive release that fans of Pablo's music will very much want to hear and own.