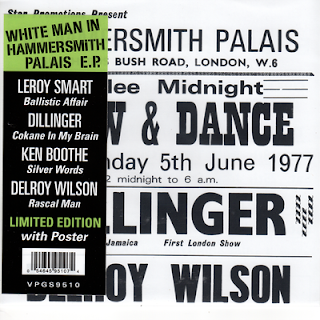 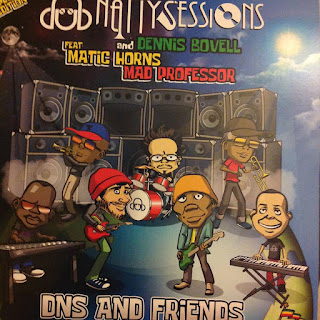 Ken Boothe, Dillinger, Leroy Smart, Delroy Wilson White Man in Hammersmith Palais EP (limited edition RSD 7" vinyl four-track EP with mini-poster, Greensleeves Records, 2017): This neat compilation EP features one song each from the reggae artists named-checked in the phenomenal Clash song of the same title (which, of course, was about Joe Strummer attending a concert at the Hammersmith Palais in London featuring these artists on June 5, 1977 and having his expectations dashed when it turned out that "...it was Four Tops all night...onstage they ain't got no roots rock rebel"). It's kind of surprising that no one's though of this cool concept previously, so hats off to Greensleeves for executing it so well. The EP features Dillinger's and Smart's fantastic 1976 UK hit tracks "Cokane in My Brain" and "Ballistic Affair," as well as Booth's 1973 cover of Detroit soul artist Sixto Rodriguez's "Silver Words," and a sweet rare cut from Delroy Wilson, "Rascal Man" (AKA "False Rasta"). The repro poster of the Hammersmith Palais bill advertises that the show ran from midnight to 6:00 am, which finally explains the first line of Strummer's song...

Dub Natty Sessions and Dennis Bovell featuring Matic Horns and Mad Professor DNS and Friends (CD/digital download, available through Bovell's Old School Records, 2017): This is the second release from this Venezuelan, now UK-based roots reggae act Dub Natty Sessions. Their debut was mixed and produced by Bovell who makes a repeat appearance, this time on bass and behind the boards at Mad Professor's Ariwa studios (the Professor mixed the album). DNS and Friends is filled with catchy and dubby reggae instrumentals (featuring all the expert touches one expects of Bovell and the Mad Professor) that achieve real brilliance on tracks like "Un Amor" (which sounds like it could have come off Rico's Jama Rico) and "Plantation" (that recalls Bovell's incredible work with The 4th Street Orchestra). While Dub Natty Sessions lay down some seriously good and enjoyable grooves, their secret weapon on this album is the majestic Matic Horns (Bovell's Matumbi bandmate Henry “Buttons” Tenyue on trombone and Aswad members Eddie "Tan Tan" Thornton on trumpet and Michael "Bami" Rose on sax), who are put to amazing use here.

A few years ago I did a related thing :-P

Very cool! You beat them to the punch!