The Specials' Feature (Plus More Ska!) in the March 2019 Issue of Mojo! 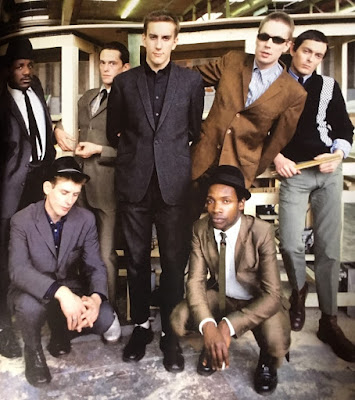 In the March 2019 issue of Mojo, there's a really excellent feature titled "Friendly Fiyah" by Keith Cameron on the history of The Specials, the making of their new album Encore and the reaction to it (Terry Hall: "People come to see us. And people have said they'd like to hear new material. Well, hello. Here's some new material. You'll probably hear it and say, 'I'd rather hear the old stuff,' but you asked for it!"), and trying to pin down why Jerry Dammers never joined the 2008 reunion of the band.

As a Specials' fan, it's depressing (but, of course, not surprising)
to read the author's summation of the situation:

Lois Wilson's sidebar interviews ("2 Tone Tales") with other 2 Tone-era musicians on their lasting impressions of that movement are a great read, too:

Pauline Black: "As a band, or a band like The Selecter, you put out a consistent social/political message, certainly a message of progressiveness, of standing for anti-racism and anti-sexism, and the songs reflected that, what it was like to grow up on the streets for black people at that time, how we dealt with the things we faced and if you wanted to make common currency with white people, that was only going to happen through music and I think that is the legacy, really, of 2 Tone."

Rhoda Dakar: "Initially, 2 Tone was just a label to us [The Bodysnatchers], we signed because we wanted to be part of the 2 Tone tour. But it became much more. Punk had started to break down the barrier between fan and audience, with 2 Tone, the barrier completely came down and a movement was formed around us, by the fans taking was 2 Tone said, its anti-racist stance, and interpreting it and backfilling the story. Perhaps that's the legacy, the fans, how fundamentally there were/are affected by the message and then spreading it."

Dave Wakeling: "[The Beat]...wanted to have fun with a social/political discourse and when you have people of a different color wearing the same fashions at the weekend and dancing together to the same music, it is a little bit harder to start a race war on the Monday...I had hoped that the 2 Tone bands themselves could have set a better example--playing an anniversary tour together, but perhaps it's the nature of the rock industry/UK that it's very hard for most of them to work with each other. Me and [Ranking] Roger have been notorious for our spats but I wanted to do a few shows together. It's hard to preach peace, love and unity if you can't play together and in that kernel is the challenge and disappointment of 2 Tone, but you battle on in your life as best you can."

This issue also contains reviews of The Specials' Encore, the Rudies All Around, Volume 1 compilation, UB40's new For the Many album, and The Trojans' Top Hits collection.

Email ThisBlogThis!Share to TwitterShare to FacebookShare to Pinterest
Labels: 2 Tone, Jerry Dammers, Terry Hall, The Bodysnatchers, The English Beat, The Selecter, The Specials, The Trojans, UB40