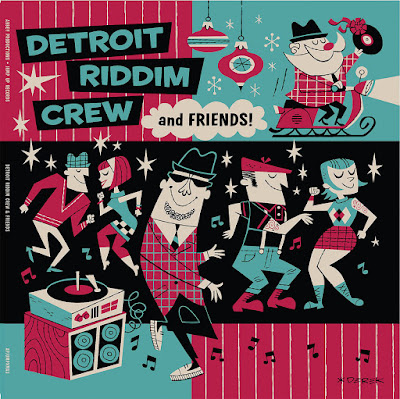 To my great shame, I'm very late in getting around to reviewing the Detroit Riddim Crew and Friends' stellar debut album and am now abashedly singing its praises to anyone who'll listen! As their name indicates, the Detroit Riddim Crew is a collective of Detroit-area ska and reggae musicians (plus a few from the Anchor/Music works in Kingston, JA) in the orbit of producer-songwriter-musician Eric Abbey (1592, The Dirty Notion, J. Navarro and the Traitors) who first came together to release riddim tracks for others to version or deejay/toast over (see their great "Castle" and "Cane" riddims--the latter appears as "Oh Shephard" here). This record, however, is half secular Christmas tracks on side A (note Santa on his Vespa sleigh in the upper right hand corner of the album cover) and the Detroit Riddim Crew's original ska and reggae material on the flip. So, at least one side of the album works/is appropriate to play all year round!

The Christmas half of Detroit Riddim Crew and Friends is (thankfully) treacle-free with a choice selection of several lesser-trod, ska-ified covers (Roy Orbison's "Pretty Paper" and a really lovely rendition of The Emotions "What Do the Lonely Do at Christmas?"), perennial radio faves ("Rocking Around the Christmas Tree" and "Sleigh Ride"), and two really fine originals: the reggae instrumental "Christmas A Come" and the upbeat "Take Care," which, given the times, could be an anthem for surviving the pandemic and boosting morale ("Time is now to lend a hand and to ask for help/And try to stand in the midst of chaos, darkness, and fear/Be sure to know that this community is here/Take care of yourself and each other"--messages of solidarity and "goodwill toward men" shouldn't be limited to a few weeks in December)! Surely, all of these tracks are destined to be broken out by discerning ska and reggae fans every late November with whatever other tunes they rely on for promoting holiday cheer.

Side B is a collection of sensational tracks that explore a variety of Jamaican musical genres. "Oh Shepard" is moody '70s dancehall cut about seeking divine intervention to survive the predatory capitalism of Babyon ("Oh Shepard, please watch the sheep/The wolves are out for the kill/And they won't stop at anything/They've got to get their meal"). "Trafalgar" is a great, brisk, old-school, big band ska instrumental, while the sultry "Come To Me" and its lively, sax-spotlighting dub version, "Double E Dub," are pop-leaning reggae, like prime early '80s UB40. The militant, roots cut "Smash Dem Down" yearns for a better way of living with each other and the planet ("So break up the hatred/And fix all the mess/There's gotta be a way, much more than this/Find a way to smash them down!"). The terrific Detroit-based group The Tellways are showcased here with their excellent rocksteady track "Friendly" (from their 2019 debut EP Closer to the Fire, also produced by Eric Abbey/Abbey Productions--and he's their drummer), which is about trying to reel in a shy, uncertain romantic partner ("If we never talked before/I want to change that thing for sure/I may seem frightening/But I assure you that I'm charming"). And then there's the hilariously over-the-top toker's hymn, "Smokin' Everyday" ("Dig this...I've been smoking everyday since 1969/Me and my son Chaos, we had a real good time/We smoked downtown, we smoked in the woods/We smoked in the ghetto and expensive neighborhoods...We were smoking everyday/Smoking every way"); this ends up being just shy of parody, except that pretty much everyone knows or has known someone as obsessed with weed as this!

Don't wait for the next holiday season to roll around to enjoy these sounds--pick up Detroit Riddim Crew and Friends' awesome album now!