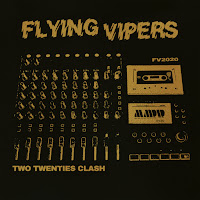 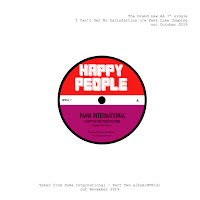 Released on 02/20/20, Flying Vipers' "Two Twenties Clash" (Digital single, Music ADD Records, 2020) marks the first single from their forthcoming album (their most recent release was last year's incredible dub version of Black Flag's Nervous Breakdown EP). One new aspect of the Vipers' '70s roots sound is the welcome addition of horns (Andy Bergman on sax, Brian Paulding on trombone, and Rich Graiko on trumpet, from The Macrotones, Kotoko Brass, and The Void Union, respectively). As might be expected, "Two Twenties Clash" is an unsettled instrumental reggae track; the martial-like drumming and relentlessly busy bass riff are an undercurrent pulling constantly against the majestic horn lines, and neither dominates. It's a great teaser for what is sure to be a compelling album. 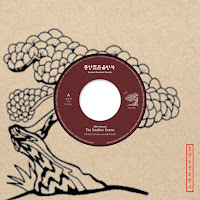 "I Can't Get No (Satisfaction)" b/w "Feel Like Jumping" (7" heavyweight vinyl, Happy People Records, 2020) is the first double A-sided single off Pama International's most recent album, Part Two (a continuation of where things left of with The Altruistic Soul Sound of Pama International aka Stop the War on the Poor). If you're familiar with these albums, you'll know that the band is currently in the midst of exploring their deep love of soul music (and singer Jewels Vass is the not-so-secret ingredient in their success). The deft arrangements of both of these classics are sure to appeal to the ska crowd (Marcia Griffith's "Feel Like Jumping" by Keith Anderson and Jackie Mittoo is now Northern Soul, while The Stones' classic is given a Stax revamp), and the powerhouse performances captured here are top-notch.

South Korean reggae act The Soul Sauce (formerly NST and the Soul Sauce) have been collaborating with sorikkun (or pansori) singer Kim Yul-hee in recasting this form of traditional Korean folk storytelling, music, and movement in a modernized reggae setting. Their latest release, following last year's Version album, is "(Who Knows) Swallow Knows" b/w "Swallow Dub" (Digital single, Eastern Standard Sounds, 2020)--a lush mix of funk, modern jazz, and reggae supporting Yul-hee's recounting of a swallow's adventures (translated from Korean: "When this swallow came to Boeun-pyo Park/I'm just looking for a nice view/I have to get to the end of my eaves/How swallows cry honey"). I don't pretend to grasp the meaning and significance of everything that's going on here, but it's beautiful and it works.