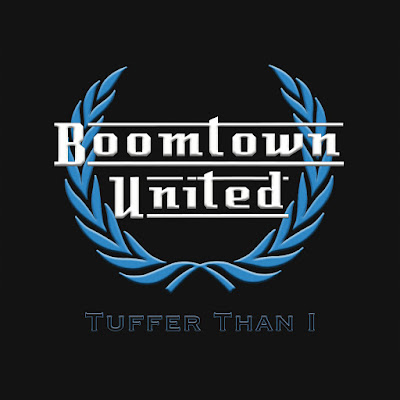 Digital, self-released, 2020
LP/CD/cassette, Jump Up Records, 2021
(Review by Steve Shafer)
Tuffer Than I is the first full-length from St. Louis, MO's fantastic Boomtown United (I reviewed their debut EP back in 2018). Top to bottom, this is one terrific album, filled with hook-laden, 2 Tone-influenced songs about love and navigating life's struggles.
Actually, this record covers a whole lotta love. The Chuck Berry-ish "How I Feel" is full of declarations of love (and great sax and trumpet solos): "I wanna be the music that you choose in your darkest of times/A rest, a treble clef, the rhythm and rhyme." The rocksteady scooterist love song "Ride or Die" pledges fidelity forever, no matter what awaits them down the road, while the sweet "Back for You" (and its dub) promises that he'll return from wherever he's being forced to go (jail?). The minor-key "Feels So Nice" conveys some real urgency--even a bit of menace--in its physical longing and lust (which she wants consummated over and over in "Volcano"); "Love You Down" is its more innocent twin--the singer is head-over-heels and can't get her out of his head after she asked him to dance (you'll have trouble getting this song out of your brain, too). The calypso-y "The Only One" lightheartedly tells the tale of two guys who don't know they're in a love triangle ("They’re falling in love while she’s having fun").
A few cuts stray from the subject of sex and romance. "Wayside" urges the listener to cast aside any fears and distractions to prevent them from bogging you down ("Driftaway" seems to be a warning as to what happens when you don't). The super-catchy "Harder Than You Know" is an anthem for people struggling with addiction:

There’s a scent in the air takes me back somewhere
Somewhere I never should have been
And there’s a taste in my mouth, no I can’t get it out
Reminding me of when I was at the edge
I’m at the end of my wits with the shakes and the fits
I desperately need this change
I’ve got to be stronger, hold on them a little longer, and maybe this feeling will fade…
The singer in the spectacular Western ska "Tuffer Than I" features over-the-top, Prince Buster-level rude boy/outlaw boasting as the singer mows down wave after wave of his approaching foes:

5 by 5, it’s still suicide
We’ve got the coffins in the back
6 by 6, we stack 'em like bricks
We only speak facts
7 by 7, none of them go to heaven
They all go to hell
8 by 8, they accumulate
And you’ll get used to the smell
And, as if to prove their 2 Tone bona fides, Boomtown United includes their scorching version of The Specials' dystopian love song "(Dawning of a) New Era," which they also contributed to the Specialized Records/Jump Up Records Check One-2: Spirit of '79 comp (which I reviewed back in 2019).

If you claim to like 2 Tone ska, Boomtown United's Tuffer Than I is a must get.
Posted by Steve from Moon at 4:36 PM