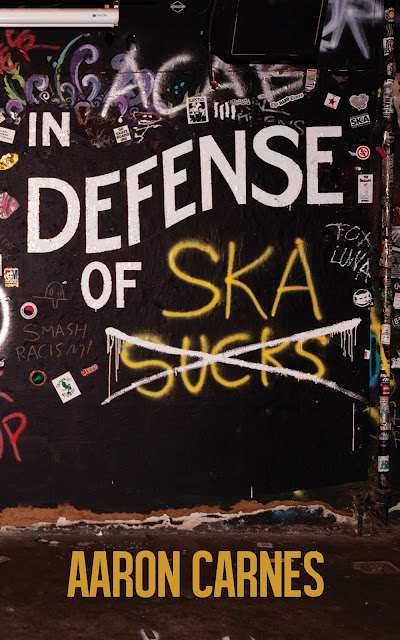 [Disclaimer: Since I was the director of marketing, promotions, and production for Moon Ska Records for most of the 1990s, I was interviewed by Aaron Carnes on several occasions for this book, and am quoted in a few chapters.]

(Review by Steve Shafer)
One's enjoyment of Aaron Carnes' book In Defense of Ska mostly likely will be predicated on your opinion of ska-punk, and if you hold notions that any sort of affiliation with--or devotion to--ska music is something to be embarrassed about (the author loves the former and apparently has had to advocate on behalf of the latter on many occasions). Carnes is a music journalist (Playboy, Salon, Bandcamp Daily, Noisey) and former drummer for the '90s, Bay Area ska-punk band Flat Planet, who happened to catch a Skankin' Pickle show in 1992 and was converted to ska for life. So, his passion for the music is come by genuinely, and he's lived the life on both sides of the stage's edge.
Carnes' In Defense of Ska is less a linearly laid out argument for the legitimacy of the genre (and jab to the haters' noses) and more of a scattershot collection of essays that is part ska history, Flat Planet road warrior band memoir, elaborate love letter to Skankin' Pickle (whom Flat Planet played with and Carnes became fast friends with their prankster merch guy Kevin), and batch of sad tales of great ska bands almost hitting it big, but stymied by self-sabotage, or a music industry that still doesn't really understand the music or know how to market the genre (see The Untouchables, Fishbone, The Toasters, Blue Riddim Band, The Shakers, Heavy Manners, The Uptones, Crazy 8s, and others). It's a fun and oftentimes very funny, breezy, and compelling read that can be enlightening (particularly the chapters on the origins of Skinheads Against Racial Prejudice; DIY touring with Book Your Own Fucking Life; the Mexican ska scene; and a delicious skewering of MTV's hamfisted SKAturday special hosted by Carson Daley) or perplexing (he posits that Millie Small's one hit wonder "My Boy Lollipop" ruined ska's chances of later breaking big in the U.S.; strongly feels that Reel Big Fish really deserves your love; and spills a lot of ink on the story behind Whole Lotta Milk and Propagandhi's versions of "Ska Sucks"), and essentially makes the argument that like the punk underground, the American ska scene is filled with some amazing and talented musicians--completely deserving of your respect--who just don't care if they're perceived as uncool by the mainstream (unless they want to sell out and then ska becomes a liability), and are incredibly content with pursuing their labor of love, against all odds, in semi-obscurity.
The original Jamaican ska musicians, and the bands associated with 2 Tone and American ska in the 1980s (which were often lumped in with new wave) have always been considered "cool" by just about everyone who's ever been aware of them. They've never needed defending. But a lot of Americans have a hard time comprehending ska. Unlike their British peers who grew up with Jamaican people, culture, and music, many Americans have found Jamaican ska and 2 Tone inaccessible, as for them it lacked context and didn't manifestly fit in with/relate to the history of American popular music, even if Black American, R&B, and early rock 'n 'roll directly influenced ska's birth. But a lot of Americans in the 1990s could easily relate to a hybrid of ska that incorporated and emphasized punk rock (after all, punk--in the form of grunge--finally broke in America in 1991). And this where ska-punk, for all of its merits, became problematic for ska.
As the U.S. music industry took note of the ska boom taking place on the underground in the mid-'90s, the only types of bands they felt were ripe for exploitation were of the ska-punk variety (because they knew how to sell punk--the majors had largely written off ska fifteen years earlier, when 2 Tone failed to catch fire here like it had in the UK, due in some part to their label's failure of imagination in marketing Black ska music made by interracial bands within a racially segregated music industry), or pop bands that had distant ska roots or a tenuous associations to the genre (and there even were some acts that were absolutely not ska, but bizarrely labelled as such in the hope of cashing in on the hype). And a fair number of the more popular ska-punk bands reveled in goofy costumes and comical/absurd stage antics, which seemed to make it all a big joke. I'd argue that some, though by no means all, of these high profile ska-punk and ska-pop acts became the definitive image of ska in the public's imagination--the stereotype of a ska band--and the vessels for all of the vitriol and disdain of people in the music press/industry and others who just didn't like or "get" the music, or realize that it came in a variety of flavors (several times Carnes notes the tension within the larger ska scene over who the music belongs to--rude boys/girls and skinheads vs. ska-punkers, etc.--and what it should sound like and how fans and bands should look and behave). So, all the haters who have been deriding ska and anyone associated with it are most often hating/shaming those from or loving ska-punk bands (there's a whole chapter about it in Carnes' book).
And that's why no one has ever had to defend ska bands like Hepcat or The Pietasters from ridicule...there's no need to.
+ + + +
Posted by Steve from Moon at 10:24 AM