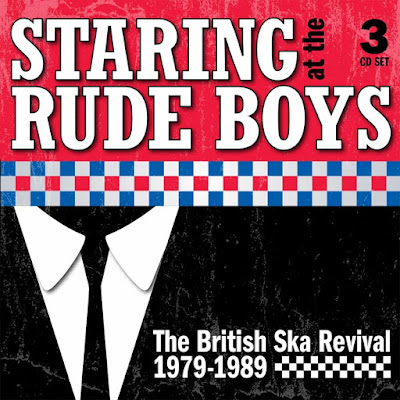 Named after one of the greatest non-ska tributes to the scene (by The Ruts, of course, who also appear on this comp backing Laurel Aitken), Pressure Drop/Cherry Red's Staring at the Rude Boys: The British Ska Revival (1979-1989) does a superb job of documenting the UK ska scene from the rise of 2 Tone through the "New Ska" scene that emerged in its wake in the latter half of the 1980s and was promoted by Unicorn Records (which coined the "New Ska" moniker), Staccato, and Gaz's Rockin' Records. This compilation presents 69 tracks over three CDs--with mostly excellent liner notes on each song/band (though there's a cringeworthy error in the Laurel Aitken/Potato 5 entry)--and while the 2 Tone and New Ska cuts are terrific (if not already featured on many other likeminded comps), the real treasure here are the dozens upon dozens of cuts from lesser-known, obscure, and even one-off novelty tracks that capitalized on/took a bit of the piss out of 2 Tone (see The Charlie Parkas' "Ballad of Robin Hood" and Max Headroom & the Car "Parks'" "Don't Panic"). Some of these non-2 Tone songs are more rough than ready, but the majority are good to great, and many of the original records now nearly impossible to find or quite pricey. Even though I'm a long-time fan/collector of UK ska from this decade, a surprising number of these songs are new to me, and this compilation fills in a big gap in my knowledge and collection (and may do the same for you, too).
With its quality control so high, it's hard to go wrong when selecting 2 Tone tracks for inclusion, and the songs collected here are mostly deeper cuts (such as The Specials' "Little Bitch," Madness' "Bed and Breakfast Man," Bad Manners' "Inner London Violence"; and I'm particularly pleased with the choices of The Selecter's "Street Feeling" and The Beat's "Whine & Grine/Stand Down Margaret"). JA ska legends Rico, Desmond Dekker, and Laurel Aitken who were involved with or active during the 2 Tone-era are well-represented (with "Sea Cruise," "Rude Boy Train," and "Big Fat Man" respectively), as are Judge Dread (with the atypically non-slack "Ska Fever," where he's backed by The Cimarons) and Arthur Kay (an original '60s-era mod and musician who recorded with Rico and appeared on many Trojan releases; his "Play My Record" is included here).
Among the lesser-known 2 Tone-era cuts are real gems from Ded Byrds ("Rich and Nasty"), Rockers Express ("Phoenix City"), new wavers Graduate (many know that this band featured future Tears for Fears-ers Roland Orzabal and Curt Smith, and their Elvis Costello/Madness pastiche "Elvis Should Play Ska" is irresistible), The Akrylykz ("Spiderman," with future Fine Young Cannibal Roland Gift, of course), The A.T.'s ("One More for the Road"), The AK Band ("Pink Slippers"), the pre-Ska-dows Sax Maniax ("Never Gonna Lose Me"), Case ("Oh"--this act featured Neil Pyzer, who would go on to Spear of Destiny, and more recently serve as producer, songwriter, and member of Pauline Black and Gaps Hendrickson-led version of The Selecter), Plastic Gangsters AKA oi band the 4-Skins ("Plastic Gangsters ("I Could Be So Good for You)"), new waver Kim Wilde ("2-6-5-8-0"), the Dublin-based Resistors ("Jeanie"), and The Ska-dows ("Ska'd for Life"--for some reason, back in the late '80s I failed to pick up the 1988 reissue of their only LP, but like them so much that I just tracked a copy down now on Discogs). Interestingly, some of the best tracks also come from moonlighting mod bands--The Merton Parkas ("Give It To Me Now") and The Lambrettas ("Poison Ivy").
The last two-thirds of disc three spotlight many of the incredible mid-to-late '80s New Ska bands, including Laurel Aitken & the Potato 5 ("Mad About You"), Burial ("Sheila"), Buster's Allstars ("Skinhead Luv-A-Fair"), King Hammond ("King Hammond Shuffle"), Mark Foggo's Skasters ("Skadansk"), The Hotknives ("Dave and Mary"), Maroon Town ("Pound to the Dollar"), The Loafers ("The Undertaker"--their keyboardist Sean Flowerdew would go on to organize dozen of London International Ska Festivals, play in Special Beat, form Pama International, and create Happy People Records), The Deltones ("Stay Where You Are"), The Riffs ("Blind Date"), and others (what, no Trojans?). If you're not already familiar with these New Ska acts, get ready to track down many more releases--they issued a ton of essential records within the span of a few years.
Overall, you'd be hard pressed to find a better compilation that attempts to represent this key decade in British ska than Staring at the Rude Boys.
+ + + +
I'd be remiss if I didn't mention Kevin Flowerdew's recently released The Ska Librarian's 2 Tone Time Machine, which makes a stellar companion piece to Staring at the Rude Boys. Flowerdew's first skazine Rude began publishing in 1989, right at the tail end of the New Ska period, and ran through 1996, when he switched its name to Do the Dog Skazine to match the record label he launched (both continue to this day). With The Ska Librarian's 2 Tone Time Machine, Flowerdew covers the UK and international ska scenes as if he had been producing Rude from 1979 through 1988. Unsurprisingly, there's a fair amount of overlap between the bands featured on Staring at the Rude Boys and those that Flowerdew writes about in The Ska Librarian's 2 Tone Time Machine--and he provides some really helpful context and history that will only deepen your enjoyment and appreciation of this comp.
+ + + +
Posted by Steve from Moon at 9:58 AM

Email ThisBlogThis!Share to TwitterShare to FacebookShare to Pinterest
Labels: 2 Tone, Arthur Kay and The Originals, Duff Review, Graduate, Judge Dread, Laurel Aitken, Maroon Town, Potato 5, Rico, The Deltones, The Loafers, The Resistors, The Ruts, The Selecter, The Ska-dows, The Specials