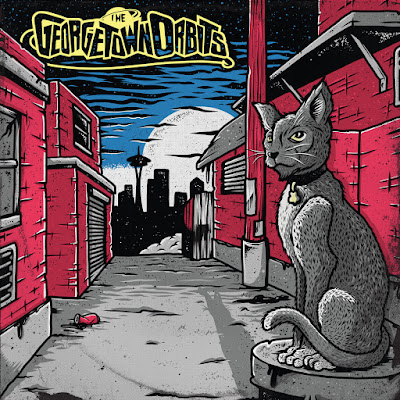 Like much of the ska and reggae that has been produced during the past pandemic year, the latest single from the Georgetown Orbits offers two songs of encouragement to steel ourselves for another plague year and keep our sagging morale up. "Stay Strong" is a fantastic reggae track full of determination and grit (with a bass line that seems like it's prodding one forward, just to keep you in motion): "I know tomorrow the sun will shine again/I know tomorrow there will be no more pain/We've all seen those days/All been through those times/We've got to stay strong/We've got to carry on..." The flip side is a sweet reggae cover of the McCoys 1965 everybody-singalong garage rock hit "Hang On Sloopy," which is about a girl from the poor part of town that everyone puts down, but the singer doesn't care; he just loves her, and wants to buoy her spirits. The song was originally written (by Wes Farrell and Bert Berns) about a real life jazz singer named Dorothy Sloop from Steubenville, Ohio (which is where my paternal grandmother was from; her father was a jeweler who lost almost everything during the Great Depression, though a few items somehow survived and were passed down--I was lucky enough to use one diamond for my wife's engagement ring). It also happens to be the official rock song of the State of Ohio and played at Cleveland Indians, Browns, and Cavaliers games to rally the fans, but you can use the Georgetown Orbits' version simply to brighten your day. And it will. (The digital single includes excellent dub versions of each track.)
+ + + +
Posted by Steve from Moon at 12:30 AM