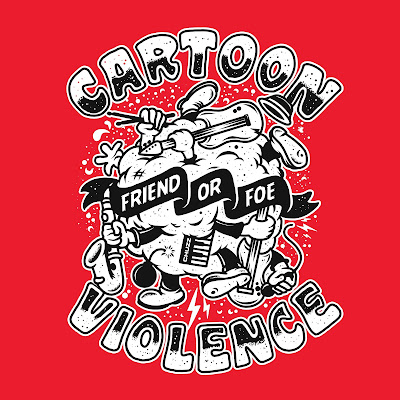 Babylove & the van Dangos have released the excellent new rocksteady digital single "Soldiering On," which, on its face, celebrates the band's 15 years of existence, acknowledges how fortunate they are to be able to do what they love, and coveys what it's been like on tour for a lot of that time ("A thousand laughs and a thousand tears/A million joints and a million beers...Soldiering on/And putting another mile behind us on the autobahn"). But it's also a message of encouragement to just keep on going, no matter what life throws at you (...like a global pandemic), with the hope that you've somehow made a difference in the lives of the people around you, so that "somebody will remember when we're dead and gone." (The music video for the track features footage from over the years of the band's antics on stage, behind the scenes, and on the road--and will make you long for a time when we all can be together and enjoy live music as one.)...Cartoon Violence have used their lockdown time very well and recorded the stellar new digital single "Friend or Foe" (which is likely the teaser for a new physical EP in the coming months). This super-upbeat 2 Tone-ish track is about being in such dire straights that you'll gladly accept assistance from whatever quarter it comes from: "This town is really sinking (hide the shame)/Everybody's out looking for who's to blame/On account of all the drinking (give it a name)/Noah's gonna have to fill his ark again/And all the king's groupies (and all the king's men)/Couldn't put me back together again/Is anybody out there?/Can anybody hear me?/Friend or foe/Let me know/'Cause I don't think that I'll make it on my own/And I need a helping hand..." (make sure to check out the video for this song--you can't go wrong with Harold Lloyd!). If you're buying this cut via the band's Bandcamp page, you'll also be treated to a live version of "Better" from Tit for Tat recorded in Vienna back when these things could happen...To be honest, I've always thought that Hollie Cook's best collaborator was Prince Fatty (it's hard to top her debut album--which I reviewed years ago), but I rather like the new smooth, Quiet Storm reggae single "Honey" ("Don't know what to do with this forbidden fruit/Temptation always leads to you/Sweet honey, it tastes too good to be true...") she's on with Gentleman's Dub Club (stream it here). GDC's new album Down to Earth comes out on March 19, 2021 from Easy Star Records...Recorded well before, but released about a week after, Trump incited a seditious, white supremacist insurrection (months in the making) that came horrifyingly close to decapitating the Legislative branch of the United States government (and only failed due to the heroism of most members of the Capitol police and a lot of dumb luck), "Big Baby Man" is The Porkers' hilariously brilliant and catchy takedown of America's worst president/human being ever--and should serve as Trump's political/personal epitaph and be required to be played in the background every time his enablers, conspirators, and supporters are interviewed on TV trying to gaslight everyone with their hate, lies, and conspiracies. The lyrics--so worth quoting in full--provide a fantastic summary of the disastrous past four years, capturing a lot of the lowlights of the fascist, white grievance-nurturing, wannabe president-for-life narcissist:

Hey America, what have you done?
You made that con man into your number one
He's lying and denying, and he's getting away with murder
Deceiting and a cheating, and loves a hamberder

Don, Jr. and Eric want daddy's approval
The Democrats pushing for impeachment removal
You've seen the First Lady, it looks like he bought her
But he tells everybody that he loves his daughter

He never built a wall, like he said he would
He said nazis weren't bad and some were good!
He said the Covid would just disappear
He bragged and he lied, and the rednecks cheered

He lost his friend called Jeff-er-y
He confused everyone with cofveve
He has the best higher capability
[Sound clip of Trump] 'Person...woman...man...camera...TV'

He fell in love with foreign dictators
And somehow was going to make America greater
A whining and a wailing when he lost the election
You gotta believe me...he's a big, big baby man!

(Everybody sing along with the animated video here!)

Trump famously has no sense of humor, so what better way to "honor"/wound/deflate him than with a cutting song like this!