Duff Review: Laurel Aitken and The Ruts "The Peel Sessions" 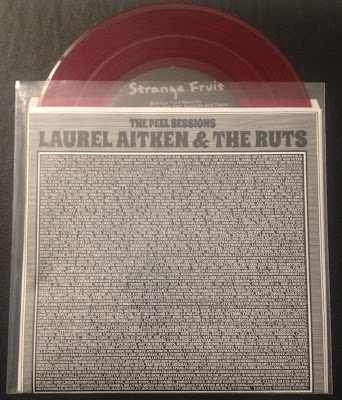 I've written previously about Laurel Aitken's 2 Tone-era collaboration with The Ruts (who were billed as the Unitones) and the two terrific singles they released in 1980 on the I-Spy label--but never thought I'd have to chance to write about the session that Laurel Aitken and The Ruts did for The John Peel Show on BBC's Radio One (recorded on April 28, 1980 and broadcast on May 12, 1980). Due to Musician's union rules, Peel was restricted by the amount of time he could spend playing records ("needle time" or "stylus-on-vinyl time"); the way around this rule was to invite bands to come into one of the BBC studios, record several songs live to tape, and these would then be broadcast during Peel's radio show (over 4,000 of these Peel sessions were recorded from 1976 to 2004). Beginning in 1987, Strange Fruit Records released around eighty to ninety of these Peel Sessions (from bands like The Specials, Madness, The Slits, Gang of Four, Buzzcocks, The Smiths, The Damned, and more), but the Laurel Aitken/Ruts recording wasn't one of them.

While I'm conflicted about bootlegs in general, as a long-time fan of both Laurel Aitken and The Ruts, I have to admit (my conscience be damned!) that I'm really pleased to have this 7" EP in my collection. The versions of "Big Fat Man" and "Rudi Got Married" are pretty faithful to their (terrific) studio recordings (which, at the time of this Peel session, had not yet been released). But the true gems are found on the flip side! There you'll find an incredible dubby version of Laurel Aitken's 1969 single "Jesse James" (of all of these tracks, this one in particular gives you a good indication of just how amazing the LA/Ruts pairing must have been live on stage) and a brilliant, rocking mash-up of B. B. King's "Rock Me Baby" with Louis Jordan's 1945 jump blues track "Caledonia" that opens with a bit of the horn riff from Henry Mancini's "Peter Gunn Theme." (It's interesting to note that Bad Manners' debut LP Ska 'n' B, released the same month as Aitken's Peel session, also includes a cover of "Caledonia"--I wonder who inspired whom here?)

This is a key release for Laurel Aitken and Ruts completists!